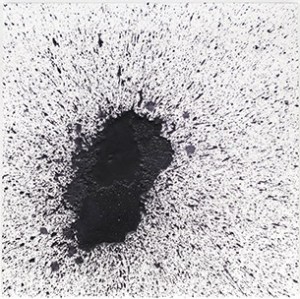 Rashid Johnson’s “Cosmic Coast” (2012), which was on offer at the auction. (Courtesy the artist and Hauser & Wirth)

If you found yourself in auction withdrawal following a crowded week that saw the big three houses pull in three-quarters of a billion dollars at their contemporary evening sales, Saturday night you were in luck. White Columns, the nonprofit gallery, hosted its annual fundraiser, an emerging art auction that, despite the fact that it was held in their tiny space below West 14th Street, closely resembled the bigger ones.

At a podium by the entrance, White Columns director Matthew Higgs stood in a white button-up with a gavel and threw out pro auctioneer slang like “the bid is against the room” (with a phone bidder) and “I can sell it for $7,000” (or some other price above the reserve).

“I’ve been watching the auctions at Christie’s and Sotheby’s online,” he explained, and you tended to root for him since, unlike the big auctions, this was for a good cause.

Though he was certainly addressing a different crowd. Untitled’s Joel Mesler hung aviators from a loop of his button-up, and Michael Clifton of Clifton Benevento wore pants with drawstrings at the ankles. And this group bid in different ways. They tended to look down as they raised their paddles for the auctioneer. Billionaires make eye contact.

“It’s a great way to support a good cause and buy emerging art at the same time,” said art advisor Nini’ Bonavoglia of such fundraising auctions. He said he’d seen pieces by Wade Guyton that sold at a SculptureCenter auction in 2008 for $20,000 sell this year at 10 times that price. The inside scoop—did you know that guy’s going to be in a White Cube group show?—came in handy, as did deeper pockets.

“There was no ceiling,” said Victoria Keddie, who bought a Mark Grotjahn at $18,500 for her boss Jeanne Greenberg Rohatyn. “She just loves and supports the artist.”
“This will help you pay off your mortgage in 10 years,” Mr. Higgs said of a piece by the more-or-less-no-longer-emerging artist Rashid Johnson, which needed no such help. It was held by a gallery girl-looking girl in a purple dress and white gloves.

After the live auction Mr. Higgs walked around the room with a wireless microphone and closed out the silent lots, which people had bid on during the cocktail hour. He allowed in-room bids for these. Gavin Brown found himself in a last-minute bidding war over a Scott Reeder piece with the artist Jeremy Kost, who ducked out around $2,600.

Mr. Brown was succinct when asked what drew him to the piece. “It’s linguini,” he said, pointing to the white lines that formed the dyed canvas’s words. Does he have a lot of pasta-based art at home? “Yes,” he said. “It’s a strong collection featuring mostly grains, and some root vegetables.”