A $95 sweatshirt currently being sold in President Obama’s campaign store is the work of Alexander Wang, a designer who’s facing a class action suit in federal court for allegedly running a sweatshop where garment workers were forced to work 100 hour weeks in a factory with conditions “comparable to those of third world countries” while being subjected to racial discrimination, verbal abuse and threats. C.K. Lee, the lead attorney representating the workers who are suing Mr. Wang told The Politicker he thinks the presence of the sweatshirt is “inappropriate.”

Mr. Wang’s Obama sweatshirt is part of the “Runway To Win” collection, which includes Obama campaign gear made by 22 other designers including Vera Wang and Marc Jacobs. Runway To Win was announced in January, before Mr. Wang’s legal troubles began, but his contribution to the project was never removed from the campaign store once the allegations came to light. Mr. Wang’s sweatshirt for the project features the phrase “Let Us Be Clear” emblazoned along the zipper. The lawsuit against Mr. Wang began in March when he was sued for $50 million by thirty workers in Queens Supreme Court. At the time, a spokesperson for Mr. Wang vehemently denied the allegations. The case was subsequently discontinued and taken over by Mr. Lee who refiled in federal court.

Mr. Lee’s complaint claimed Mr. Wang’s garment workers suffered “inhumane working conditions” in his factory on Broadway which was described as a windowless space “about 200 square foot in size, with more than twenty garment workers working inside at any given time.” According to the complaint, workers were “required to work inhumane hours … in excess of 100 hour weeks at times (15 hours per day for 7 days per week),” particularly during the lead up to the four seasonal Fashion Week shows in New York. Workers were allegedly not paid overtime, given proper breaks, or sick leave. One plaintiff, Wenyu Lu, described being hospitalized for 12 days after they “passed out at the work station” after a working “25 hours with no break” and being “pressured” to “continue to work or be fired.” A spokesperson for Mr. Wang later claimed Mr. Lu was fired for “serious harassment issues.”

In addition to the brutal conditions at Mr. Wang’s factory, the lawsuit also claims workers faced “intentional affliction of emotional distress” including being “regularly called ‘lazy,’ ‘stupid'” and other names and being subjected to “disparaging references” to their “national origins.” Workers were also allegedly told that  “if anyone complained they would be summarily terminated” leading to constant “fear of retribution and retaliation.” The complaint also accuses Mr. Wang, who is of Taiwanese descent, of multiple counts of racial discrimination for because their managers were allegedly all white while “all garment workers are exclusively Asian or Latino immigrants … because such minorities are easily controlled and fearful of losing their jobs.”

A spokeswoman for Mr. Wang told us the sweatshirt was “just designed by him” and not produced at his factory and that he is “not planning on creating any other designs for Runway to Win.” The Obama campaign has not responded to a request for comment on this story. 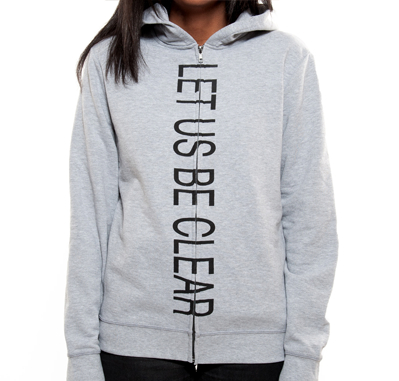