RICHMOND, VA — In 2008, President Barack Obama was a fresh face who promised to lead the country in a new direction. To score another four years in the White House, the president needs to recapture the swing states and voter enthusiasm he had four years ago as an incumbent with a record that includes the sluggish economic recovery and a war still raging in Afghanistan. The president kicked off his re-election effort yesterday with back-to-back rallies in two battleground states, Virginia and Ohio, where he attempted to assure supporters he’s still the transformative figure who captivated them during the last election.

For the president’s second rally of the day, at Virginia Commonwealth University in Richmond, 14,000 people waited several hours to see him speak. Before President Obama took the stage, a soundtrack of soul classics warmed up the audience.

“That’s not a special song is it?” a reporter for a German newspaper chain asked us as the crowd clapped along to Stevie Wonder’s 1973 hit “Higher Ground.”

We replied that we weren’t sure what he meant.

“It’s not something like the unofficial party hymn, because everyone’s dancing up there,” he explained.

The VCU crowd was certainly, as President Obama’s campaign team so often likes to say, “fired up.”

In addition to the music, several speakers warmed up the audience including the First Lady, the VCU men’s basketball coach, former Virginia Governor Tim Kaine and Congressman Bobby Scott, who discussed the crucial role Virginia is expected to play when voters head to the polls in November.

“Four years ago, everybody said that Virginia was important in the presidential race and they said that, if Barack Obama carried Virginia, he would win the election,” Mr. Scott said. “Well, they were right.”

President Obama became the first Democrat to win Virginia in more than four decades when he won the state in 2008. In his remarks at the rally, Mr. Scott noted CNN declared President Obama the winner in that election two minutes after they called Virginia.

Like Virginia, Ohio is one of the swing states that helped secure President Obama’s victory in 2008. At VCU, the president acknowledged some people may be disappointed with his record since his win last time around.

“This election will be even closer than the last. Too many of our friends and neighbors are still hurting because of this crisis,” President Obama said. “I’ve heard from too many people wondering why they haven’t been able to get one of the jobs that have been created. … Why their family hasn’t yet been touched by the recovery.”

In his speech, the president admitted economic progress has been slower than we might like, but he warned the country could fall backward with a Republican taking over in the White House.

“We are making progress and now we face the choice, for the last few years the Republicans who run this Congress have insisted that we go right back to the policies that created this mess in the first place,” he said.

Young voters were a crucial component of the president’s base in 2008 and maintaining their support is crucial if he hopes to put on a repeat performance. Many of the college students at his VCU rally were clearly ready to jump back on President Obama’s bandwagon.

Amber Bertram is a student at J. Sargeant Reynolds Community College in Richmond who attended the rally with her sister. Seeing him in person alleviated any doubts Ms. Bertram had about President Obama’s chances of re-election.

“He knows how to give a good speech, definitely,” said Mr. Shurldes. “He just seems like a very likable guy.”

After the president’s speech, his campaign touted the large turnouts at his back-to-back rallies. Despite the many excited supporters, outside the rally, we saw some evidence of the diminished enthusiasm that’s threatening to be the president’s Achilles heel in the upcoming election.

Tyler Scherer and Jeff Payne are VCU freshmen who didn’t attend the rally. According to Mr. Scherer, they didn’t go because “it was a little early” and they’re in the middle of finals.

“It’s a lot of stress,” Mr. Scherer said of his exams.

Neither Mr. Scherer or Mr. Payne have decided who they’re going to vote for. Mr. Scherer said he’s “not informed enough” to make a decision yet.

“I might try to get informed before,” he said hopefully.

Mr. Scherer said he thinks many other VCU students aren’t engaged with this year’s election.

“Honestly, everybody here is kind of like in the dark from politics. … There’s so much more that you’ve got to worry about,” he explained.

Across the street from the building where the rally was held, a man named Shawn was selling buttons featuring President Obama’s photo and campaign logos. He wore a Yankess hat and declined to give his last name. We asked how many buttons he sold at the rally.

Shawn also sold buttons at a speech the president gave at the same location in 2008. Four years ago, sales were better.

Though being an incumbent means facing skepticism and questions about whether he can match his prior performance, the president’s support is holding up well enoughso far. He currently has a slim lead in the polls in Ohio, Virginia and nationwide. 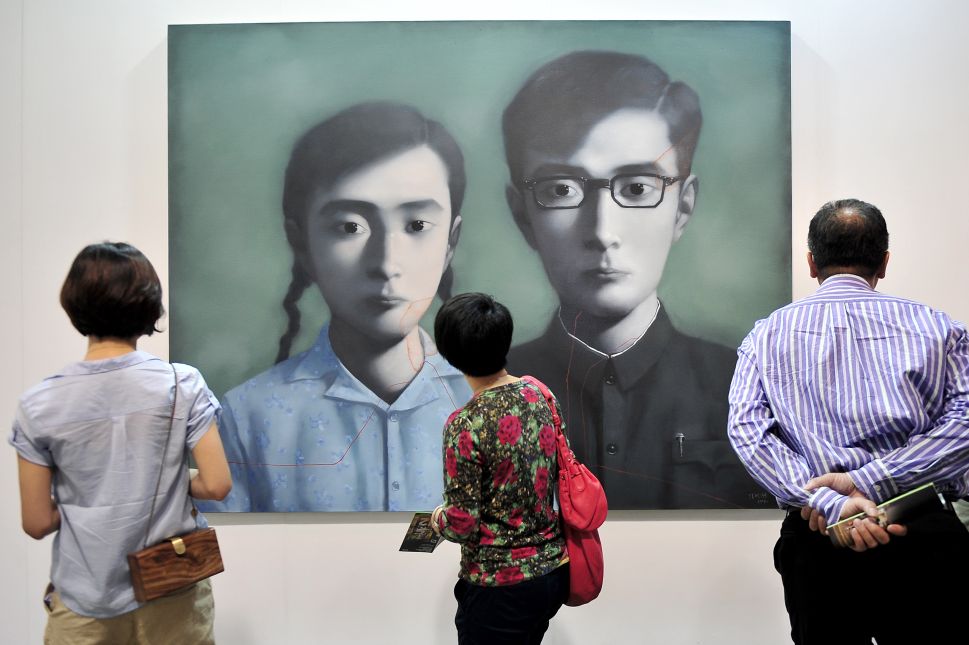