Newly elected French President Francois Hollande had his first meeting with President Barack Obama today. In a press conference with reporters after their conversation, President Obama said he was eager to hear Monsieur Hollande’s assessment of American cuisine after the upcoming NATO Summit in Chicago.

“I was reading the President’s biography … he actually spent some time in the United States in his youth, studying American fast food.” President Obama said. “Although he decided to go into politics, we’ll be interested in his opinions of cheeseburgers in Chicago.”

Monsieur Hollande responded with a promise to never besmirch burgers.

“I would like to thank President Obama for the knowledge he has of my life before I took office,” he said, according to an interpreter. “I will say nothing against cheeseburgers, of course.”

“I just want to remember that cheeseburgers go very well with French fries,” he said.

“I also warned him that now that he’s President, he can no longer ride a scooter in Paris,” Mr. Obama said. “I know because I’ve tried with the Secret Service and they don’t let me do it.”

President Hollande responded by saying he hoped he’d put his scooter days behind him.

“As to my own vehicle, the one I used to have until I took office, I hope that I will not have to use it,” he said.

“We share the same views, the fact that Greece must stay in the eurozone and that all of us must do what we can to that effect.  There will be elections in Greece and we wanted to send a message to that effect to the Greek people,” President Hollande said.

Monsieur Hollande also said he was sticking by his campaign promise to withdraw French troops from Afghanistan.

“I reminded President Obama that I made a promise to the French people to the effect that our combat troops would be withdrawn from Afghanistan by the end of 2012, he said. “That being said, we will continue to support Afghanistan in a different way, our support will take a different format, and all of that will be done in good understanding with our allies within ISAF.  And so we will continue and comply with our commitment to that country, and supply and support, as I said, in a different way.”

Mr. Obama said they would discuss the situation further in Chicago. He also said they identified Iran, Syria and the transitions in Egypt and Tunisia as “topics of critical importance.”

“We’ll be devoting extensive time to those issues throughout the G8 meeting,” President Obama said. “France has shown great leadership on these issues, and as I indicated to President Hollande, when the United States and France, along with our other key allies, make up our minds to stand firm on the side of democracy and freedom and development, that enormous progress can be made.”

President Hollande said he hoped negotiations could begin in Iran and promised to follow through on France’s promise to help the Middle Eastern countries that took part in the Arab Spring transition to democracy.

“Regarding Iran, we, again, noted that we share views and that we could start negotiations, but that being said, with the required firmness that Iran doesn’t get the nuclear military capability,” Monsieur Hollande said. “Regarding Syria and Arab Spring countries, we talked about the Deauville partnership, and here again I said that we would comply with our commitments.” 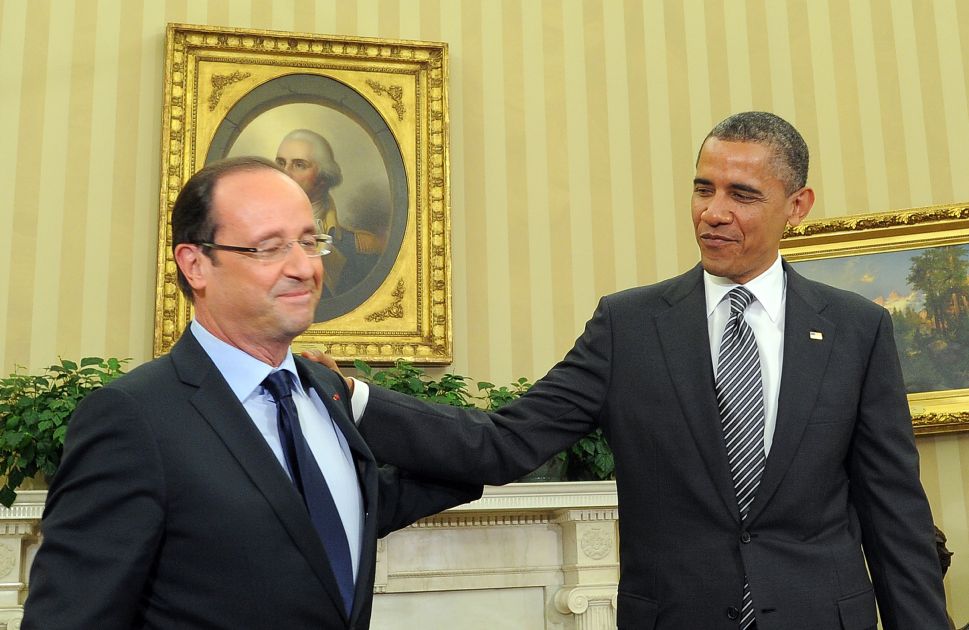