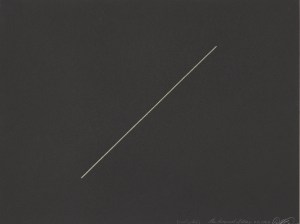 It’s hard to cull affect from Minimalism. Only those most prone to the pathetic fallacy—the same set who claim dogs smile or birds seem sad—will see ready emotion in the often deadpan, quotidian objects (wooden boxes, piles of bricks) that make up the oeuvres of artists like Robert Morris and Carl Andre. Yet the first exhibition solely devoted to the preparatory studies and sketches of Dan Flavin, master of the fluorescent light tube, provides a glimpse of another, more personal side to the practice of one of the most reticent and iconic Minimalists.

The two sculptures that open the show are there to remind you of the Flavin you know. Untitled (to the Real Dan Hill), 1978, is a single neon fixture leaning in the corner. As the glows from pink and yellow lights on parallel vertical tracks radiate outward, they combine with green and blue tones bouncing off the wall from two hidden bulbs. The net effect is an understated white light that illuminates the gallery. In the museum’s courtyard is Untitled (in Honor of Harold Joachim) 3, 1977, in which pink, yellow, blue and green fluorescents are cross hatched to make an eight-foot grid of cool and warm tones. These pieces exemplify what Minimalist Donald Judd called “specific objects,” works that fall somewhere between painting and sculpture.

But the rest of this show, the drawings, answer questions these mute objects raise, such as, who were the men to whom they were dedicated? And could the artist who created them draw? The hundred or so drawings here—which include a generous display of notebook pages and juvenilia—lend themselves to a new understanding of Flavin’s project, both by banishing its ostensible hermeticism, and by establishing more clearly his relationship to contemporary culture and his interest in line.

Born in Queens in 1933, Flavin was a Korean War veteran who worked in the mailroom of the Guggenheim and as a guard at the Museum of Modern Art before making it as an artist. His early work reveals a weakness for the messy, dynamic painting of Vincent Van Gogh and Abstract Expressionism—pretty much the opposite of Minimalism’s hands-off coolness. He started getting his first ideas for three-dimensional constructions around 1959, inspired by the Marcel Duchamp readymades at the Philadelphia Museum, and incorporated a crushed tin can covered in paint in Apollinaire wounded (to Ward Jackson), 1959-60. Monochrome paintings festooned with little light bulbs followed soon after (see his drawings for the “Icons,” 1962-3). It was a dramatic moment for painting—the illusion of perspective, diminished and flattened to the limit, had popped out into the viewer’s physical space.

This exhibition’s theatrical peak is the diagonal of May 25, 1963, a bright-gold crayon diagonal drawn as a slash on black paper. Rarely is inspiration so clear: the diagonal declares that Flavin has found the fluorescents that would become the basis for his practice over the next 30 years. Limited to a set number of sizes and colors because they were produced industrially, fluorescents restricted Flavin’s work to conceptual arrangements of pre-existing things.

Meanwhile, his drawings were neither shown nor sold until after his death in 1996. Yet an early series of quirky sketches of visitors at the Museum of Natural History show that he drew for pleasure while working as a guard there. Later, he made spot-on ballpoint pen portraits of artist friends like Claes Oldenburg and Judd, and when he moved to Westhampton in 1972 he filled notebook pages with elegant charcoal sketches of sailboats in Sagaponack. He did these for himself, and you can see the genuine glee in their execution. It was an obsessive practice separate from, yet intimately related to, his sculptures.

The show also features preparatory drawings for his fluorescent works. These are not expressive drawings but rather technical studies in light bulb engineering and exhibition planning; many of them were made on graph paper. Still, they yield insights: untitled study for gold, pink, and red, red, 3 September 64 is a group of cryptic hatch marks. To look at it is to realize that, for Flavin, florescent tubes were the material equivalent of pen lines. Two ballpoint pen sketches of 16 monuments for V. Tatlin and 8 monuments for V. Tatlin, from the late 1960s, show the swooping, inverted tower-like sculptures rendered as ikat-like patterns of diamond warp and weft. Flavin comes across as a spontaneous draftsman—not at all the rigorously logical approach you might expect from someone who dedicated works to the mathematician William of Ockham.

Flavin also collected drawings. He bought his first one, a sketch by Rodin, while stationed in Korea with the Air Force. Other drawings from his collection on display here include a Sol Lewitt, a Robert Morris, two great Jean Arps from 1917, three Piet Mondrian sketches (one on a cigarette package, another on a milk carton, the third a gorgeous piece entitled Pier and Ocean: Starry Night, 1914) and a Toulouse Lautrec. He was attracted to artists who rendered space and volume with an efficient line, and this taste encompassed rare, lively flowing ink drawings by Japanese 18th and 19th century artists Hokusai and Hiroshige, and an assortment of Hudson River School landscape drawings by more obscure figures, such as Aaron Draper Shattuck and Jasper Francis Cropsey. Flavin’s collection of Hudson River School work is so deep that, combined with his Long Island seascape sailboats, his work might be reimagined as having a previously undivined relationship to the American horizon.

Flavin’s dedications also tell us much about his world. From predecessors like Vladimir Tatlin or Jasper Johns, to friends like Judd and Frank Stella’s first wife, the critic Barbara Rose, his titles let us in on his social and intellectual context. There’s legendary dealer Leo Castelli, but there are also works named for the presidential candidate George McGovern, and even an unrealized piece dedicated to Marilyn Monroe. Minimalism is often seen as being the aesthetic opposite of Pop, but here Flavin nods at the popular culture of his time. For much of his career, he lived at 17 Broadway in Brooklyn, just off the Williamsburg Bridge at the corner of Kent Avenue. For a moment his conceptual light pieces seem less remote, less removed from the flux of everyday life. A notebook even hints at his humor. He wrote to a curator, “Raise the damned ceiling, Richard, or else you are cramping my style. Love, Flav.”

The show’s curator, Isabelle Dervaux, has raised the conceptual ceiling on Flavin, providing a clean installation that gives new insight into an artist whose range is broader than previously imagined, funnier, and more human. She resists the canonical understanding of Flavin to reveal a quirkier project. The connections made here between the official and the unofficial Flavin are never obvious, but they are for that reason more intriguing, and indelible.