Rockaway Beach: A well-established Hipster Hamptons of sorts for the last few years, a place many thought would hit fever-pitch sometime this summer, the moment when—like Williamsburg and Bushwick and Red Hook and hell, the rest of the entire borough of Brooklyn before it—well-heeled Manhattanites discover it, and then, ruin the fun for those who were ostensibly there “first.”*

Then, the Trend Pieces.

And now: The Page Six Item.

Yes, if you’re the ornery, traditionalist, orthodoxy-of-cool type, this is the moment you can singularly declare Rockaway Beach “over”: When Page Six gets—and publishes—sightings there.

1. Patti Smith and Klaus Biesenbach rated higher than Victor Ortiz and his girlfriend. In the New York Post.

2. Unlike the majority of gossip column sightings entries, this one was clearly not a plant. Either someone tipped them off, or a Page Six-er hangs out in Rockaway Beach.

3. This is, as far as we can tell, the first Page Six sighting in Rockaway Beach, ever. The precedent for notable sightings in Rockaway Beach in the New York Post: A bloodthirsty “Shark (or Ray).”

This is how it begins.

Soon, Rockaway Beach will be flooded with all different kinds of Sevigny and Ronson. Pop-up French clubs with doors that only open for people with personal texts from Larry Gagosian or Daenerys Targaryen’s dragons will be erected. The Walkmen will re-locate there, and record an album. Madras-sporting Conde Nast warlords and ink-merchants will eventually venture out via towncar, ostensibly in search of “authentic” lobster rolls at first, lying about being on a wayward detour to Martha’s Vineyard—we got lost on the way to Teterboro, har har—but eventually bringing their friends, convincing them that putting $1M into renovating a local standby clam shack with leather banquettes, a hostess who can only read names printed in boldface, and a chef whose greatest talent is an ability to upsell the shaving of truffles over anything from a burger to an artisinal Ritz cracker. Finally, the Manhattanites who read about it on Thrillist and Daily Candy will clamor for entry, eventually getting it, and everyone who preceded them will have already started to repeat the process somewhere else (in all likelihood, 5.9 miles down the road, at Fort Tilden), but not before Kanye West has built a replica Coliseum nearby, where he will show a movie on twelve screens of him using King Tut’s tomb as a urinal.

Or, of course, this could all be a matter of semantics, and not even remotely a tipping point inasmuch as a curious anomaly: A Page Six item in Rockaway Beach, oh my, how whimsical (but otherwise insignificant).

…Which may also be what they want you to think.

Summer at your own risk.

[*Excluding, of course, those locals who have been going to Rockaway Beach since its lifeguard union was basically The Warriors. They are simply an adorable accessory of the local charm, and nothing more.] 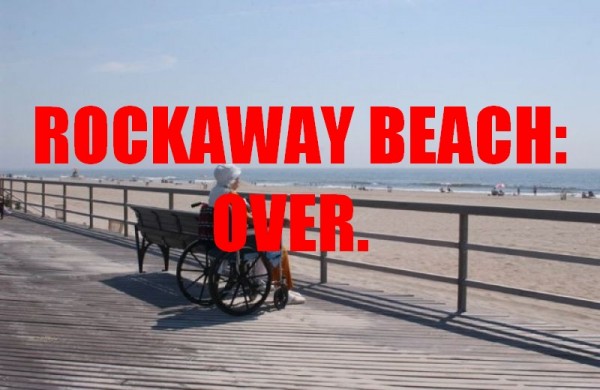