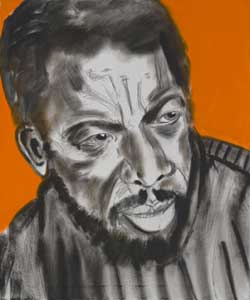 Frederick J. Brown, who painted hundreds of portraits of jazz and blues musicians, died earlier this month at his home in Scottsdale, Ariz., at the age of 67. His wife told The New York Times that the cause was cancer. Ornette Coleman, John Coltrane, Dexter Gordon, Thelonious Monk, Jelly Roll Morton and Bessie Smith were among his subjects.

His work is in the collections of the Met and the Kemper Museum in Kansas City, Mo., and his work has been exhibited at the Studio Museum in Harlem and the National Portrait Gallery in Washington, D.C. In the 1980’s, when he was living in Beijing and teaching at the Central College of Fine Arts and Crafts, he was the subject of a retrospective at what is now called the National Museum of China.