EAST RUTHERFORD – In a 911 Memorial pocket park downtown, U.S. Rep. Bill Pascrell (D-9) put first responders at the center of his campaign in a placid set-piece, while network TV continues to assail him for siding with polluters against environmental calls for a cleanup of the Passaic River.

“It is sad, it is desperate, it is hypocritical, and we are confident that the people of New Jersey will not believe more negative false ads,” said Justin Myers, campaign manager for the Pascrell Campaign, who has relied to date on the media knocking down Rothman’s attack points on Pascrell.

This time, in an especially significant way, the Rothman Camp sees a legitimate attack line.

“I have seen the ad seven times, and it is not a negative ad,” said Rothman Spokesman Paul Swibinski. “This is a legitimate public policy debate. Should polluters pay 100 percent of the river cleanup? We say yes. Bill Pascrell says no. It is a completely public policy difference.  We are bending over backwards to put this in context. We are saying he wants taxpayers not to pay it all – but to pay ‘too.’ He’s saying the Army Corps of Engineers should play a role in the cleanup.”

Outspent 2-1 in the lead-up to the final two weeks, Rothman poured the bulk of his media budget into the network television salvo.

Whatever negative message Pascrell’s allies push in the shadows and the alleys to help drive get out the vote operations, the megaphone-driven slogan out of his campaign stands clear: he’s the Bill Clinton-backed fighter for the district committed to the idea that government can do good. It’s a positive message as he looks forward to the former president’s presence tomorrow in Paterson to help drive turnout.

By contrast, Rothman doubles down in the final days of a Democratic Primary with his argument that Pascrell, in acquiescing to polluters’ wishes that taxpayers help fund the river cleanup by employing the Army Corps of Engineers, is insufficiently progressive to truly fight for Democratic Party principles.

Political insiders up close to the campaign break down the voter penetration potential as follows: if voters are so fatigued with negativity in campaigns and feel chilled by Rothman’s repeated charaterizations of Pascrell, some of them blatant inaccuracies, Rothman will see his Bergen base depressed.

But if voters are estranged from the idea that government and politics can do anything useful at this point, infected as those mechanisms are with special interests, a district-wide depressed voter turnout could give the advantage to Rothman, who naturally enjoys a larger share of the 9th as a resident and 16-year serving member of Congress for Bergen County.

PolitickerNJ.com asked Pascrell today about the potential for the latter scenario and he quickly propped up the Tea Party as the main target, something he’s done from the start of the campaign, scorning Rothman mostly on the point of his adversary’s refusal to challenge movement conservative leader U.S. Rep. Scott Garrett (R-5) rather than go after a fellow Democrat.

Are people past the point of believing?

“There’s no question there’s cynicism,” said the congressman from Paterson. “Government’s not the be all and end all, but logjams aren’t going to help the people, and that’s what we’re getting with the Tea Party.”

Belief in government as embodied by the institutions of education, armed forces and first response in particular stand as the centerpiece of Pascrell’s vision as he closes the campaign less focused on browbeating Rothman’s record than spotlighting the people he says he has tirelessly fought for in Washington for a decade and a half.

“All of you people are people of action,” said Pascrell, surrounded by police and fire fighters in the park. “You do more than you discuss. That’s what we do too often. We discuss. But you do. You are prepared to respond to danger by running toward it.”

Joining him were firefighters who helped Pascrell secure the James Zadroga 9/11 Health and Compensation Act of 2010, which led to the establishment of the Sept. 11th Victim Compensation Fund.

John Feal, a 9-11 first responder instrumental in the passage of the James Zadroga 9/11 Health and Compensation Act of 2010, now awaits a ruling by National Institute for Occupational Safety and Health Director John Howard that broad categories of cancer be eligible for compensation benefits.

“I don’t know much about politics, but we need Congressman Pascrell to stay in Congress,” Neal told reporters, as he also applauded news of another Pascrell piece of legislation, which would enable post traumatic stress disorder afflicted soliders to be eligible for the Purple Heart.

“It’s always good having someone in your corner down in Washington,” said Mike DeFilippis, vice president of the Port Authority PBA. “Congressman Pascrell speaks from the heart. Congressman Rothman is a great congressman, but Pascrell has just gone that extra mile for us. You’re going to see support for him from law enforcement on Election Day.”

At the end of the press conference, DeFilippis looked at his fellow first responders and reiterated, “Please tell your members to vote for this man. He’s been there for us, now it’s time for us to be there for him.”

In a South Bergen town blanketed with Rothman signs, Pascrell’s counterpoint came with understated symbolism as his nemesis beat the contrast line on television, his strategy through Election Day.

“This is not a cheap shot,” said Swibinski. “It’s not negative. We think this issue is a huge winner. We think it’s more important, more powerful than anything else in this campaign.” 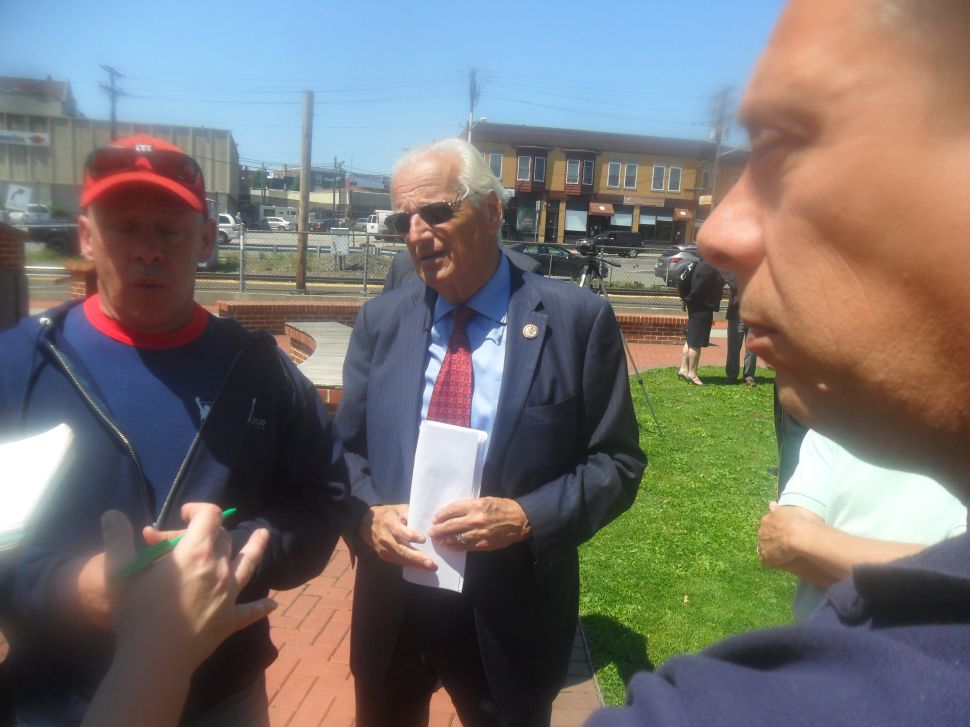