“Donald M. Payne Jr. has long been a champion of the many progressive causes that matter to working families in this congressional district,” said RWDSU Local 108 President Charles N. Hall Jr. “Just as Don has been on the ground supporting our community, we will be on the ground doing everything we can to ensure his victory. All the members of Local 108 and the rest of the RWDSU family are ready to stand up and fight for Donald M. Payne Jr. in this important Congressional race.”

“We need representatives in Congress like Don who can get New Jersey back to work and back on track,” continued Hall. “Don will be a strong advocate for the working men and women of this district. He has an impressive record of creating and protecting good jobs, and he comes from a family that has served this community for decades. Don’s father, the late Congressman Donald M. Payne, was a staunch advocate of the labor movement and a dear friend to the RWDSU. We look forward to campaigning vigorously for Donald M. Payne Jr. in the days and weeks ahead.”

The RWDSU nod caps a string of union endorsements for Payne that includes the Teamsters, the Boilermakers, the Seafarers International Union and the United Transportation Union, as labor support seems to be coalescing around Payne.

“I thank Local 108 of the RWDSU, and I want to make clear that, if I’m elected, I will be fighting for their working members on Day 1,” Payne said. “The district needs a congressman that labor can trust, and throughout my career, I believe working men and women could rely on me. Good-paying jobs and workers’ rights have always been my top priorities.” 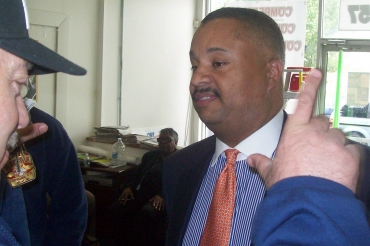