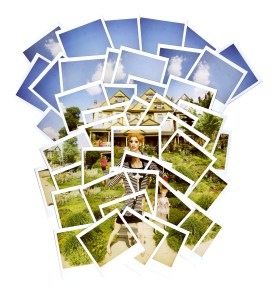 Jeremy Kost, whose photographs of drag queens, transsexuals and celebrities are being exhibited alongside Warhol’s Polaroids at a temporary gallery at 150 11th Avenue, says he’s fond of freaks. He began his career in “the bowels of the East Village” (that’s his phrase for it) essentially by accident.

In 2000, he moved to New York from Washington, D.C.—where he was one of three partners in Velvet Nation, at the time the city’s largest gay dance party—and quickly hooked up with a male Brazilian model who happened to have a Polaroid camera in his apartment. His first foray in New York nightlife was at the slightly obviously-named gay bar the Cock, though the sign outside is surprisingly tasteful (it’s a small neon red rooster that hangs over the door). He took the camera with him.

“The first night at the Cock,” he said in an interview last week at his exhibition, “there was a biological woman pulling eggs out of her vagina, cracking the yolks and then eating them. So I went from basically cargo shorts and Abercrombie to,” he paused, “That. I went from being a super conservative queen to a place where my cock was being grabbed anonymously. I was freaked out.”

The camera, he says, became a way of guarding himself, yet he was increasingly drawn to these characters. That first night, he wanted to “get the fuck out of there,” but he also met Amanda Lepore, the transgender model who would become something of a muse for him.

Over the next decade, he created what is probably one of the largest contemporary documents of the club scene in New York. His show, however, has an ominous subtext: the medium that both he and Warhol worked in—the Polaroid—is already extinct. All the film expired in 2009 and, at this point, it costs about $4.00 per frame. His studio in Hell’s Kitchen is filled with boxes of expired film that he buys in bulk wherever he can find it (sometimes off the backs of trucks parked in alleyways, like a drug deal).

Much of the show, called “Of An Instance” and presented by Hugo Boss and the Warhol Museum, comprises photographic Polaroid collages of drag queens Mr. Kost shoots on the street at various cities across the country. These works are almost sculptural in the way they piece together an image. But now, every time he releases the shutter on the camera, he does so with the realization that he won’t be able to do it forever.

The first room in the exhibition has silkscreened paintings of his celebrity photographs, which is a kind of new direction and response to his dying medium. Photographing nightlife comes with certain perks: there’s Keith Richards—looking ghostly, at his daughter’s 21st birthday party; he told Mr. Kost after he was photographed, “I make good music and I make good children.” Mr. Kost has stood on the red carpet with Beyoncé, Tom Cruise, Dolly Parton and countless other celebrities. There’s also a self-portrait of the photographer on his 34th birthday, his face painted up like a skeleton.