With his latest campaign ad blitz in the battleground states, President Barack Obama would like to remind you that the economic crisis began before he was in office. His ad, which will air in nine states, articulates what are clearly becoming the main early messages of his reelection bid; the economic recovery may be slow, but it is happening and the Obama administration has made a number of acheivements that make it worth keeping the faith for the many voters who believed in him during the last election.

“In 2008 an economic meltdown, 4.4 million jobs lost, America’s economy spiraling down. All before this president took the oath” a narrator says in between grim news clips from the financial crisis as the ad begins.

As shots of Tea Partiers play, the narrator said,  “some said our best days were behind us, but not him.” The narrator goes on to give the Obama administration credit for several accomplishments as clips of the president play beginning with a shot of his inauguration clearly labeled “January 2009.”

“He believed in us. Fought for us and today our auto industry is back firing on all cylinders. Our greatest enemy brought to justice by our greatest heroes Our troops are home from Iraq. Instead of losing jobs were creating them,” the narrator said.

President Obama’s ad, which is called “Go” ends with an acknowledgment the economy hasn’t fully recovered. However, it argues the president still deserves the fervent hope he infamously inspired and courted in 2008.

“We’re not there yet, it’s still too hard for too many,” the narrator said. “But we’re coming back, because America’s greatness comes from a strong middle class. Because you don’t quit and neither does he.”

“Go” is airing in all of the biggest battleground states; Virginia, Pennsylvania, Ohio, Nevada, New Hampshire, Iowa, North Carolina, Florida and Colorado. Watch the ad below. 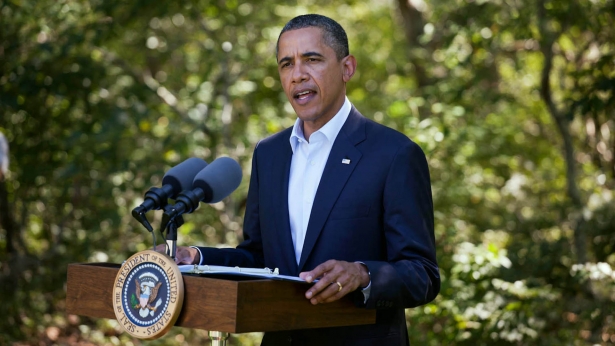