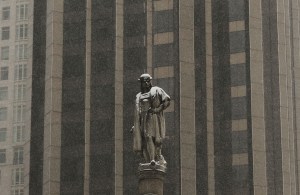 The top of the column where the statue appears, seen in winter. (Courtesy Getty Images)

The Public Art Fund has enlisted Japanese artist Tatzu Nishi to build a living room, six stories up, at Columbus Circle around the Christopher Columbus statue there. The piece will debut this fall and allow visitors to visit the explorer via elevator or stairs.

Here are a few more details, from DNAInfo:

Baume added that when Tatzu made his first visit to New York City, “he became fascinated with the (Columbus) statue. He realized that despite its central location the Columbus statue is barely visible, a solitary figure hiding in plain sight atop a column some 70 feet in the air.”

Viewers will walk up six flights of stairs or take an elevator to enter the living room, which will sit atop a scaffolding. Once there, the public will be able to get an intimate look at the 13-foot Columbus statue while also getting views of Central Park and Midtown from the room’s large windows.

The living room will be outfitted with a couch, TV, lamps, and coffee table. The walls will be decorated with wallpaper designed by Nishi depicting images of American culture.

Public Art Fund Director and Chief Curator Nicholas Baume said the artist wanted to give Christopher Columbus “an apartment of his own, with Central Park views.”