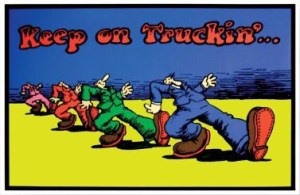 The Art Newspaper has an interview today with legendary comic artist R. Crumb, who has a show that just opened at the Musée d’Art Moderne de la Ville de Paris.

Though he recently started showing with David Zwirner and has been critically recognized for some time, Mr. Crumb clearly still isn’t used to the sterile realm of high art, which is fairly charming since you’re usually supposed to be blasé about all this so that people know they can take your art seriously. Take this question:

Do you find it strange that people pay a lot of money for originals of your work?

Yes, but it’s all relative. I can sell a ten-page story for $50,000 if I’m lucky—for cartoonists that’s a lot—but a single oil painting by Cy Twombly goes for millions of dollars. I’m involved with David Zwirner Gallery, in New York, and they are very good to me, a high-class operation. They had a show of my “Genesis” work [illustrations of the Book of Genesis], and after it they had a big fancy dinner party at David Zwirner’s house, a big elaborate house in Manhattan. Everyone’s standing around eating snacks, and there’s this Cy Twombly painting on the wall above the mantel in his living room, and to me it just looks like some two-year-old child’s scrawls, and I asked this guy who worked at Zwirner: “How much is that worth?” And he said: “Oh, I don’t know. Probably starts around $5m.”

The interviewer (who, I just noticed, is actually my boss Sarah Douglas) later asks if Mr. Crumb was influenced by Phillip Guston. Mr. Crumb says he was not.