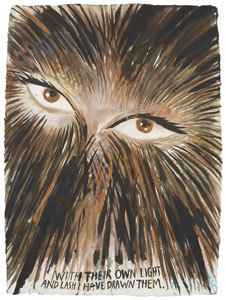 A drawing by Raymond Pettibon that he uses as his Twitter avatar.

Los Angeles artist Raymond Pettibon is really letting loose on Twitter these days. The man behind many of Black Flag’s most iconic posters has been posting scores of tweets on topics ranging from U.S. foreign policy to rap (Lil B is a particular interest) to basketball. The majority of them are inspired by Burma Shave’s legendary roadside advertising campaign, though they’re a bit more unhinged than the shaving brand’s typical copy.

They are, in fact, so wild that at first we thought they couldn’t possibly be by the artist, but a rep at David Zwirner, where Mr. Pettibon has shown for years, confirms that it is the real deal. We’ve read through the artist’s messages—822 as of press time—and present below our 10 favorites.

10. Fric n Frac tied up in back til Smithson fills the canyon in w/Schick.Flick yr Bic for Burma Shave.
April 19, 2012

5. Boston 2 games uyp: signing fat tub of lard Shaq brilliant:great move;you couldn’t have done it w/o him on the bench
April 21, 2011