Reverend Jeremiah Wright’s successor as pastor of Chicago’s Trinity Baptist Church, Otis Moss III, took to Twitter to comment on the New York Times‘ story about a controversial plan by a conservative Super PAC run by billionaire Joe Ricketts to attack President Barack Obama by associating him with Reverend Wright.

“We must fight this! Just got word about the structure of the ads. I will be calling on people of good will to stand with our church,” Mr. Moss wrote. “It is not about denomination or theology This is an attack on the black church, ministry and prophetic witness.”

President Obama met Reverend Wright in the late 1980’s while he was working as a community organizer in Chicago. He went on to join Trinity Baptist Church and Reverend Wright officiated at his wedding and baptized both of his daughters. Their association became controversial during the 2008 elections after ABC News revealed excerpts of Rev. Wright’s sermons in which he accused the American government of having invented the HIV virus, repeatedly lying and in which he described 9/11 as “America’s chickens … coming home to roost.”

President Obama subsequently described the sermons as “divisive and destructive” and withdrew his membership from the church. Rev. Wright was retiring when the scandal broke in March, 2008. He had given his last sermon as pastor one month earlier and Rev. Moss was already preaching from Trinity’s pulpit. Mr. Moss officially took over as the church’s senior pastor in mid-2009. On Twitter today, Rev. Moss also asked for support now that the scandal is being resurrected.

“We ask for prayer for our church and community. Thank you,” he wrote.

Joan Harrell, a spokeswoman for Trinity Church, told The Politicker Mr. Moss would not be commenting on the situation beyond his Tweets.

“Thank you very much for offering Dr. Moss the opportunity for an interview but he is not providing any more comments about the New York Times story,” she said. 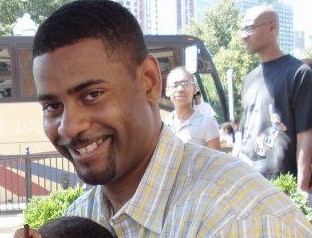