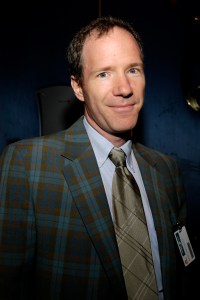 During Frieze New York, VIPs given access to the fair’s courtesy BMWs had a chance to hear a sound piece by Rick Moody called The Undependable Global Positioning System inside the fair which is pretty much what its title suggests: a robotic voice—similar to one that would provide directions on a GPS system—reciting the text of Mr. Moody’s story of the same name, which features rather unreliable navigational aids.

The work imagines what would happen if a GPS system had human flaws: the UGPS is not only spatially lost but existentially lost as well. Moreover, Mr. Moody’s humorous work bemoans the condition of our “rushed digital life” in which the experience of being lost is, well, being lost. The project is still in development, but right now it has its own website, which features a preview of an application that might become a more elaborate UGPS.

As part of Frieze’s discussion series, Mr. Moody led a mock investor meeting during which he read part of the story—referred to as a prospectus—and asked the audience for funding. We caught up with him after the event.

Gallerist: As a writer, to what extent do you feel that writing a piece that doesn’t exclusively exist on the page is a different experience?

RM: Well, I’ve done a lot of stuff in the past few years where I try to find alternative distributions mechanisms. For example, I had a story that existed only on Twitter in its first incarnation. And I’m trying—in fact, I’m making a story right now that exists only as status updates by a fictional character on Facebook, although nobody knows he’s fictional. So this presented itself as a new way to think about distribution. As far as the audio part goes, I’ve dabbled in radio, so there’s often been an audio component to what I do. And the idea that it would be best expressed not in my voice but in this robot voice doesn’t seem that far from radio plays and things like that, so I was already thinking on that axis. But I was just trying to find another way to contextualize the whole thing, meaning here at the fair, and with this sort of mock digital interface of the whole thing.

Gallerist: Is this passion of yours, for finding new mediums for projecting your work, something that you feel is in response to, perhaps, a decline in interest in literature as such?

RM: I don’t really think there’s a decline in literature. There’s competition for literature among other media, but the people who still read, still read passionately and I’m one of them, so I feel like, if they decided that we were somehow an outlaw form and there was no purpose for us we would bubble back up through the intense devotion of those of us who give a shit.

RM: So I’m not worried about that part, it’s more that what I’ve done is in part a description of what I see happening around me in the kind of rushed digital life, and also an attempt to push the form of literature out of the rigid binding of book covers, if only as an experiment. I mean, I love books first and foremost—that’s what I love—but fiction has always been a total magpie form, it’s always borrowing other things and incorporating those other forms into its ambition, that’s why Ulysses has excerpts from the newspaper in it, and that’s why William Gaddis’s novels have plays in them and all that kind of stuff. So borrowing from digital culture is just another way of trying to force fiction to see if it can function in a different shape. Like maybe it’s postmodern, maybe it’s modern but—

RM: Yeah—I still believe that we can do new things with the form and that it’s worth trying to do.

Gallerist: So then the thorny question would be: if form is content, when you were conceiving of this piece, which came first, the words or the—

RM: The idea—this was totally concept outward. … You can occasionally have the concept first and then build the language around it. For me there always has to be a narrative element or I’m not interested exactly, so it’s one thing to sit in the car as we did one day and say, “What would happen if there were an undependable global positioning system?” And then another thing entirely to try and create a kind of narrative framework for it—it didn’t exist to me until the text existed.

Gallerist: A place like Frieze: art fairs are generally considered to be industry events where huge sums of money are exchanged for art objects. I was covering the Pulse fair and I saw work by this artist Sharka Hyland made of excerpts of Flaubert’s Madame Bovary printed on pieces of paper, and they were selling for about $1,200 a pop. How do you feel about art as commerce and this place of commerce, and your place in it as an artist?

RM: I cannot in good conscious say that the feeling of it is entirely comfortable; however, at the end of the day if it means that more people are interested in art that doesn’t strike me as horrible, in the same way that the Twilight books drive Hachette Book Group right now, which also publishes me: I don’t care if people love those books—they’re reading and maybe if they begin reading and develop the habit of reading, they’ll read something more challenging. And in the same way—yes, it’s true capitalism is horrible, we’re all slaves to it, it’s rapacious, and the same is true in the art world as in every other American business or international business, but at the same time it’s that very capitalism that makes possible the Frieze Projects. So occasionally capitalism also has that paradoxical ability to make something that’s not totally loathsome.

Gallerist: Can you give us some sort of idea what that computer program might look like when it’s finished?

RM: I can’t really because we’re sort of making it up as we go along, and the tongue-in-cheek part is absolutely essential to the whole thing for me, so I could conceivably tear the whole thing down tomorrow, and we’d do none of it. Or maybe some brilliant idea will come to Greg [Cole] and me who’ve been working on it, and it will persist. But it’s precisely its ramshackle, improvised-as-we’re-going-along quality that makes it the antithesis of a well-made corporate object, and that is its purpose.

Gallerist: How have you found working in a group creating the project? How does it compare to sitting at a desk and writing?

RM: Part of the attraction of this was the collaborative aspect of it. That’s the reason to do it. As I’m sure you know, the writing part can often be lonely, so that’s why I play music too: it gets me out of the house.