“I couldn’t care less about herb gardens,” said Natalie Jeremijenko in a shaded area of the Socrates Sculpture Park on Sunday at the opening of “Civic Action: A Vision for Long Island City.” The artist and engineer was in jeans and a black cowboy hat with a large rhinestone at the front, her blonde hair loose around her shoulders. She had just finished giving a workshop on planting AgBags–Tyvek bags that can be hung from windows and fire escapes to create “urban agriculture systems” that promote environmental health and urban farming. “Flash-infusing black pansies into vodka,” said Ms. Jeremijenko about some methods she’ll be teaching during her workshops at the park this summer. “People don’t know how to eat or use black pansies.”

Ms. Jeremijenko is one of four artists (along with Rirkrit Tiravanija, Mary Miss and George Trakas) asked to participate in “Civic Action,” a project curated by Amy Smith-Stewart in which the artists provide alternative visions for the northern swath of Long Island City that is home to many industrial sites as well as The Socrates Sculpture Park. The park itself was a landfill and an illegal dumpsite until 1986, when several artists led by the sculptor Mark di Suvero turned it into a studio and an exhibition space for artists. Ms. Jeremijenko’s vision is manifested through her installation Farmacy, 2012, which consists of various vertical urban farms like the one at the opposite end of the park—a large installation consisting of a tall scaffold slung with AgBags sprouting delicate yellow and red flowers. From a distance, it looked like a derelict drive-in movie screen. TREExOFFICE, another of Ms. Jeremijenko’s installations in the park is a yellow mixed media structure in a poplar tree that serves as a work space with WIFI, locally produced power and, most importantly, Manhattan views.

Nearby, against the backdrop of the sparkling East River, a large blue and white canopy billowed in the sun. Held up on bamboo poles, the canopy was part of artist Rirkrit Tiravanija’s untitled installation, a tent at which park guests were served the artist’s signature dish of Thai curry over rice. The piece, like many of the artist’s projects, intends to build interaction around food, in a context not immediately associated with fine art. Socrates’s director of public programs, Shaun Leonardo, is helping to organize the cooking throughout the show’s run.

But the show is ultimately about more than a hearty, feel-good meal. “These foods that are beyond your crunchy farmers’ market,” said Ms. Jeremikenko. “Urban agriculture systems are really designed to address the issues of the 21st century.” 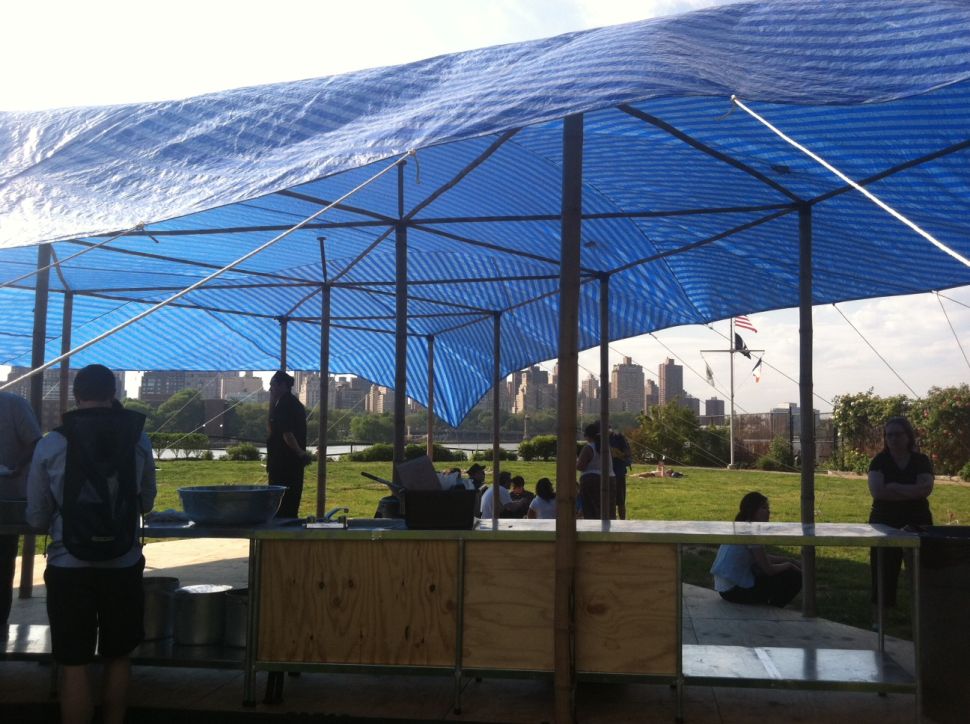