Things do not look good for President Barack Obama based on the newest Rasmussen Reports daily Presidential Tracking poll, which shows Mitt Romney with 50 percent of the vote compared to the president’s 43 percent. This is Mr. Romney’s first time hitting the 50 percent mark and his largest lead to date.

Rasmussen attributes Mr. Romney’s rise to dissatisfaction with the state of the economy in the wake of last week’s disappointing jobs report. According to Rasmussen, 48 percent of voters say the president is doing a poor job handling the economy compared to just 37 percent who say he’s doing a good or excellent job. 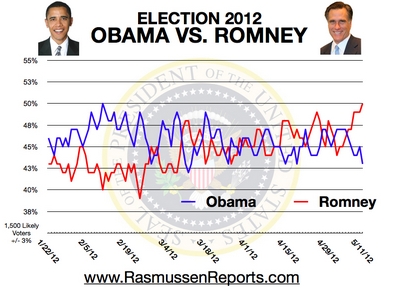