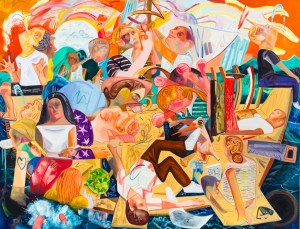 If we ever send out another Voyager probe, and we need a new image that offers up the full range of human experience, with its chaotic complexity of outward expression, its discreet harmonies and its subtle inward pathos plastered directly onto absurdity, an image that can convey to alien eyes the existential truth that we make our own truths here, but don’t quite make them freely, we ought to use Building the Boat While Sailing, the centerpiece of painter Dana Schutz’s show at Friedrich Petzel Gallery.

Ms. Schutz has a sure hand. Expansive, expressionist gestures are meticulously prepared and impeccably organized, and if you always hit your marks, you don’t have to hit them hard—Building the Boat While Sailing shows about 20 busy, overlapping figures, painted in thin layers of oil, using the minimum necessary modeling or line, on a canvas 13 feet wide. This kind of minimalist maximalism does two things. It creates a deeply sympathetic feeling of good-humored professionalism, a sincere artificiality like Buster Keaton doing Max Beckmann. And it makes the work a seamlessly dynamic, insuperably elusive proof of its own necessity. The content seems like only a pretext for the form, but the form, in turn, is only enough to convey the content. And so, like the schoolboy’s perpetual motion machine—a sheet of paper that says “TURN, PLEASE,” on both sides—it will, given the benefit of the doubt, keep running forever.

Pasted onto an orange sky shading down through cyan foam to deep blue deeps is a ship-shaped wooden raft. (If the composition is Keaton, the perspective is all Busby Berkeley—most of the figures are mostly flat, but there’s just enough depth to keep everything in place and working hard. One tan semicircle serves as the ship’s deck and its side simultaneously.) On the upper left corner sits a Munch-like lizard-faced boy in shorts and flip-flops, his head tilted back, spouting out foamy white water. His spout doubles as a cloud, and two gray curves are both motion lines and a seagull.

Beneath him another face drawn on the deck spouts water, too, and a blond figure with a crossed-heart tattoo painted on her pillar-like arm reaches into the water after a fish who’s either also spouting water up into, or else dangling from a white fishing line hanging down from, the bottom of someone’s white sneaker. Sitting beside her is a modernist Madonna in a sharp white blouse, her face Picasso, her straight black hair doubling as a veil, holding two boards with nails in them. The boards, like a little pyramid of wood casting a long shadow elsewhere on deck, are modeled in three dimensions, but the Madonna is flat. (Our lives are like frames of film stacked in a pile instead of lined up, everything together with everything; but the objects we make and that unmake us are the opposite, without insides, nothing but surfaces.)

A redhead holds onto the raft’s edge and paddles in the water beside a round green pizza of a turtle dipping its flipper into a triangular hole next to the transcendently martyred ship’s architect, on his back and upside down, his legs bent in a fylfot, his arms bearing down against wooden boards that he himself assembled, one white Ked pressing a saw, its teeth reversed, deeply into the beak of a featherless, mirror-eyed albatross. (This bird would be a good update of the American eagle—it sees everything and knows nothing.) Above him a worker pounds nails with a cartoon-motion fist, and another planes the deck with his teeth, looking like some kind of prehistoric elephant, raising curls of wood like tusks. (As Willem Flusser said, the shoemaker doesn’t only make shoes: he also makes himself a shoemaker.) Behind them two young men raise a mast from which swings a line describing a shape like a Jesus fish, and an ominous jet of water behind them stands in for a beam of sunlight breaking through cloud.

It must be the mast-raiser in the popped collar who will reject his savior even unto death. On the sail behind the other one, overlapping his head, is a rangy blue W; next to the W, two short gray stripes either nod to the Twin Towers, or form an equals sign on its side—as on earth, so in heaven, and vice versa. There are also yellow flames, another saw, a gymnast, a thought balloon, wooden ribs and, maybe, a sea monster.

Salt is an appealing metaphor. Vital to life but poisonous in quantity, with a faint but ineradicable corona of biblical and mythological connotations, it is proverbially white but grainy, so that when you compress it into a lead frame, for example, as does Pier Paolo Calzolari, and stamp your question into it backwards—Quando il sognatore muore che ne è del sogno, or “When a dreamer dies what happens to his dream”—the salt casts a multitude of tiny shadows onto itself, so that what ought to be black and white looks gray. Knocking out the wall between Marianne Boesky’s gallery on 24th Street and Pace on 25th (the show is jointly presented by the two galleries) likewise creates the perfect context of slightly dreamy misalignment for Mr. Calzolari’s scorched metal landscapes and elaborate, blunt, theatrical, often electrically revolved or refrigerated conceptual devices. Constructing the question is exactly as difficult as finding the answer, because if the one requires the other, they must be the same thing. A rotating oyster shell in Tiara C calls to mind the “clock beetle” in Kobo Abe’s novel The Ark Sakura; in Baignoire (Dialogue entre l’eau e et l’oeuf), an egg hanging over a lead-covered tub, precariously but infinitely, reaches for the question’s question-and-answer. It is “yes, but,” but what follows the “but” is unspecified.