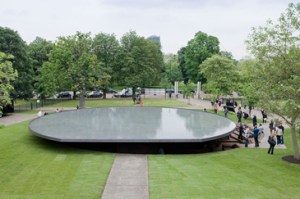 For the past 13 years, Serpentine Gallery’s lavish summer pavilion has drawn visitors to the adjacent Kensington Gardens in London, and the 2012 Olympics have drawn extra attention for the project this year, which was designed by Ai Weiwei and the Swiss architects Herzog & de Meuron. The piece looks a bit like a reflecting pool, and, T: The New York Times Style Magazine reports, has been sold. The buyer is reportedly Indian billionaire Lakshmi N. Mittal and his wife, Usha.

More photos and details from the magazine:

…the gallery, which has sold past pavilions to recoup the costs of their construction but has never publicly identified the buyers, announced that this year’s pavilion has been purchased by the billionaire Indian steel magnate Lakshmi N. Mittal and his wife, Usha.

The pavilion opens June 1 and will be on display until Oct. 14.