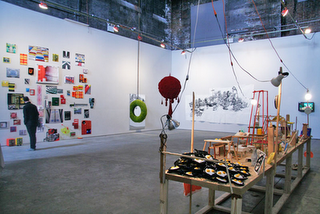 The Seven fair, which has appeared for the past two years in Miami during Art Basel Miami Beach, has always walked the line between being a traditional art fair and a curated show. Like New York’s Independent fair, which bills itself as a “temporary exhibition,” it offers work from multiple galleries in a format that eschews booths for a more free-wheeling hang.

In its inaugural New York edition, Seven’s exhibitors—BravinLee, Hales, P.P.O.W., Postmasters, Pierogi, Ronald Feldman and Winkleman—have gone even more in the group-show direction, extending the show well beyond the typical short run of a fair. Late last month, each gallery installed work by one artist at Pierogi’s gigantic Boiler space on North 14th Street in Williamsburg, Brooklyn, and the show runs through May 20.

The space is stark. From afar, it sort of looks like a science fair in a gym—but if the tone is cool overall, it’s surprisingly cohesive. Gil Yefman, from Ronald Feldman, is showing Blood Moon, a big knitted red globe that hangs in the middle of the room. The red, knitted drips are said to be the artist’s conceptualization of male menstruation, and it’s been related to the artist’s transgender identity. Without that information, though, we’d only know that a much smaller version of the piece appears in the sleek wall-mounted animation Shivers, in which knitted nipples belch and squirt, and a character in a knitted, bodily tube sock suit dances and burns.

Diana Cooper’s Watch Your Step, from Postmasters, is a wall installation of collage and assemblage, and resembles the results of a graphic design brainstorm: manufactured panels (like electrical outlets and caution signs) and spaces (plastic stadium seating, concrete tunnels) are clustered by palette and layered over images of fire, , grass and sky. It functions like a game of mental pinball. Try getting your eye in there, and you’re spit out by fast exits and arrows pointing in on each other.

Each work builds on the last. Following Watch Your Step is Andy Yoder’s Swing (on view courtesy of Winkleman): a half tire of little fake flowers, mounted against a mirror to form the shape of a swing. It follows the self-replenishing dead end of Ms. Cooper’s road signs and passageways. It’s also the type of big, friendly object that defies hyper-rationalization, which goes for Ms. Yefman’s Blood Moon. To its left is a black and white ink drawing by Dawn Clements (of Pierogi), a still life on crumpled paper: from the flowery mass emerges a bell jar, a crucifix, a tea kettle and century-old high heels of various sizes. The old-world decor speaks to Hew Locke’s (Hales Gallery) embroidery Chariots of the Gods, which looks like an early Christian or Eastern diety made of gold rope on black fabric, with depictions of prisoners hidden in the coils. The content hints at subversion, but it’s more enamored with style.

Ben Gocker’s Bad Dreams (P.P.O.W.) alone makes the whole trip worthwhile. A long sand table (the kind you might remember from pre-school) is lit by clip-on flood lights and covered with remnants of childhood: the weirdest being rubbery casts of hound-dog faces, painted brown, red, yellow and pink with little human eyes. On the wall, Mr. Gocker has framed pages from a storybook version of the film E.T. The powdery alien lies wide-eyed and face-up on the bathroom floor, while Elliott in white long johns rests with his hands clasped delicately around the bony alien fingers. It’s holy. The sensitivity adds potence to the items on the table.

In the back corner, Emil Lukas’s Skin (BravinLee) looms like an alien ship. Mr. Lukas has covered half of the space’s massive boiler with white, heat-shrink plastic. One imagines the suffocating power of the plastic if the space’s huge boiler were to heat up; the press release tells us it’s a transformation of the boiler’s form into something unrecognizable. Like Ms. Cooper’s Watch Your Step, you’re spit out soon after you’ve solved the formal exercise—but not even that might have registered at an art fair.

This month-long exhibition is hardly a fair, save for the exhibitor-led collaboration, heightened awareness of gallery names, and lack of an overall curatorial mission (there’s no curator, per se, but Joe Amrhein from Pierogi is described as a sort of “wedding planner”). The decision to call it one, though, proposes an alternative to both gallery shows and the fairs. Participating galleries still feel it’s necessary to show work in fairs like the Armory and ADAA, reported P.P.O.W. founder Wendy Olsoff over the phone, but she continued: “We see [Seven] as another way of working that’s less competitive and more holistic, more creative. You have more time with your artists and meet the other dealers.” Artists seem happy, said Ms. Olsoff; people spend more time with the work, the space allows for bigger projects, the work looks less like product, and price tags aren’t so prominent.

Plus, Seven makes for a more collaborative sales model in general. “If I brought in five of my best clients, and Pierogi did, it’s advantageous for every one,” she told us.

It’s a model which at least a few dealers would love to get behind. Since Seven opened two years ago in Miami, where last year’s sales were very good, many galleries have asked to join, and fairs have asked Seven to join them. This may not be a replacement to the larger events–the thought of hundreds of these pop-up shows makes Frieze look like a writer’s retreat–but we’re getting somewhere.