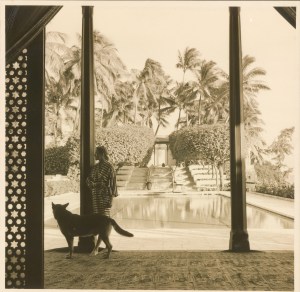 Over a luncheon of salmon steaks, quinoa salad and cappuccino tartlets at the Magic Room in the LVMH Tower on Thursday, the Museum of Arts and Design (MAD) unveiled its planned exhibitions for the coming year and beyond. The many shows include an exhibition of the architecture and Islamic art at Doris Duke’s mythical Hawaii estate known as Shangri La, a show by “Painter… writer… scholar… metalsmith extraordinaire” Daniel Brush and an exhibition that will display no physical objects whatsoever, only fragrance.

“You couldn’t be king of France if you didn’t understand turning,” said artist Daniel Brush about the machine process that we believe involves a cutting tool and a lathe. Mr. Brush has an upcoming show at MAD. “It’s too hard to be a painter,” he said, “which is why I’m always looking for diversions.”

We looked out of the floor-to-ceiling windows of the Magic Room at the roof-top gardens of pre-war buildings.

“Princess Charlotte was one of the first women to turn,” said Daniel McFadden of MAD, who was in a bright pink tie. He noted that turning, along with rhetoric and the art of war, were subjects that members of the royal family were required to learn. Of the princess, he added, “Her turnings were unbelievable.”

The talk then turned to Mr. Brush’s upcoming show, “Daniel Brush: Blue Steel Gold Light,” which opens Oct. 16 and will display the artist’s large-scale paintings, “gold-granulated jewels,” a selection of his steel and gold tablet wall sculptures along with “witty magnetic adornments made from plastic.”

“It’s been 15 years in the making,” said Mr. McFadden. He was then put in charge of turning the slides as the brief lecture began.

Particularly captivating were images of “Doris Duke’s Shangri La: Architecture, Landscape, and Islamic Art,” a show that debuts at MAD on Sept. 7. The slides showed images of Duke’s five-acre property of terraced gardens, carved marble doorways and pools overlooking the Pacific Ocean. The show will also present art objects from Duke’s personal collection, which will be shown for the first time outside of Shangri La.

Another intriguing show, despite its lack of physical objects: “The Art of Scent,” opening Nov. 13, which will explore the “design and aesthetics of olfactory art” via 12 fragrances that have been critical to the evolution of fragrance. It will be presented with a special installation designed by Elizabeth Diller of Diller Scofidio + Renfro that accentuates the chemistry and artistry in the creation of scent.

MAD’s retrospective on the life and work of Margaret De Patta (1903–1964) opening June 5, “Space-Light-Structure,” seems poised to firmly implant De Patta within the canon of modernist design. An American jewelry designer who applied the concepts of mid-century modernism to her creations, De Patta studied with Bauhaus professor and photographer Laszlo Moholy-Nagy when he emigrated to the United States. It’s no wonder that her brooches and rings resemble the work of Kandinsky and Klee.

Leaving, we asked Mr. Brush about his race-car driving, which we overheard him talking about earlier. He gave a little demonstration of his first time driving a race car, for which he flipped his tie over his shoulder, put his hands in the air as if wrapped around a steering wheel and re-enacted the scene. “It turns out I was only driving something like two miles an hour,” he said and laughed. He has not raced cars since then. Now, he builds them.