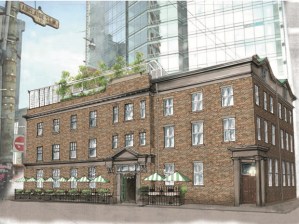 Soho House, the members-only private club that started in London and has locations all over (including one in the Meatpacking District), will be opening up shop in Toronto.

Nick Jones, the founder of Soho House, spoke to Canada’s National Post about the decision to open in Canada.

Of the club’s members, who are chosen by a committee of “people in the creative industries,” Mr. Jones downplayed Soho House’s exclusivity a bit, saying all will be welcome:  “We love everyone from the struggling script writer who’s writing their first script to an accomplished person in the arts community.”

Soho House had a pop-up club in the tent at Frieze Art Fair on Randall’s Island. We’re not members (though, if anyone at Soho House is reading this, uh, maybe you could help us out with that?), but we snuck our way in with a business card and an indignant speech (something along the lines of “Do you know who I am…”). There was free gin. Ah, the luxuries of a private club. Congrats, Canada!