PASSAIC – It doesn’t look like Union City on the eve of election.

Pre-election in that place, nearly every establishment on Bergenline Avenue has a prominently displayed smiling face of Mayor Brian P. Stack in the window.

Those that don’t usually have an owner inside who gets a phone call and a voice on the other end that says, “What’s the matter, you’re not happy?”

A Latino stronghold that sits on the Passaic River, the City of Passaic is a torque point in the CD 9 contest, a town that should be a lock for U.S. Rep. Bill Pascrell, which Assemblyman Gary Schaer (D-36) muddied with an endorsement of Pascrell’s cross-the-river rival, U.S. Rep. Steve Rothman.

Mayor Alex Blanco backs Pascrell, but Blanco and Schaer are like father and son – in fact, the mayor recently named Schaer the godfather of the most recent addition to the Blanco family.

If Passaic ever gets to the point of political hand-to-hand combat, Blanco and Schaer won’t be on opposite sides.

So the Pascrell for Congress strategists turned to Stack, the Hudson County human hydra head of GOTV operations, who never saw a door jamb he couldn’t slide a piece of literature under, who shipped 125 bodies into the city tonight to do door pounding for Pascrell.

The Bergenline Avenue buses rumbled into view outside School 11 close to 7 p.m. and the Union City campaign workers waited for their field general.

“This is when they start playing Ride of the Valkyries,” muttered a Hudson County operative, tie loosely in place as he grabbed a box of Pascrell campaign literature and dropped it on the sidewalk.

A black sedan pulled up in front of the school and deposited Stack on the sidewalk.

The mayor divided the crowd into squads of six, who on directives from Pascrell operative Ritzy Morales hit different neighborhoods in the city on foot.

Stack and a handful of his closest confidants were the last to go.

Stack likes Pascrell, but he also has a long tormented history with the Hudson County Democratic Organization, whose strategist, Paul Swibinski, serves as Rothman’s campaign consultant.

Stack figures a friend of Swibinski’s is his enemy, which triggered his willingness to get into this contest with two weeks to go.

Informed of the presence in Bergen tomorrow of President Barack Obama’s political consultant, David Axelrod, in town to put his formal exclamation point on the Rothman campaign, a Stack operative curled a lip of disdain.

“That’s meaningless,” was the assessment. “This contest comes down to GOTV.”

Bodies weighed down with Pascrell pamphlets trooped through the neighborhood, Stack personally ziplining up and down the stairs of front porches and, on one occasion, climbing to the third story of a tenement on Main Street where the meringue rhythms sprang out of a caged balcony holding half a dozen revelers who looked in bewilderment at Stack moving forward with arm outstretched just long enough to say the words “Vote for Bill Pascrell” before he was back down the stairs again and on the street. 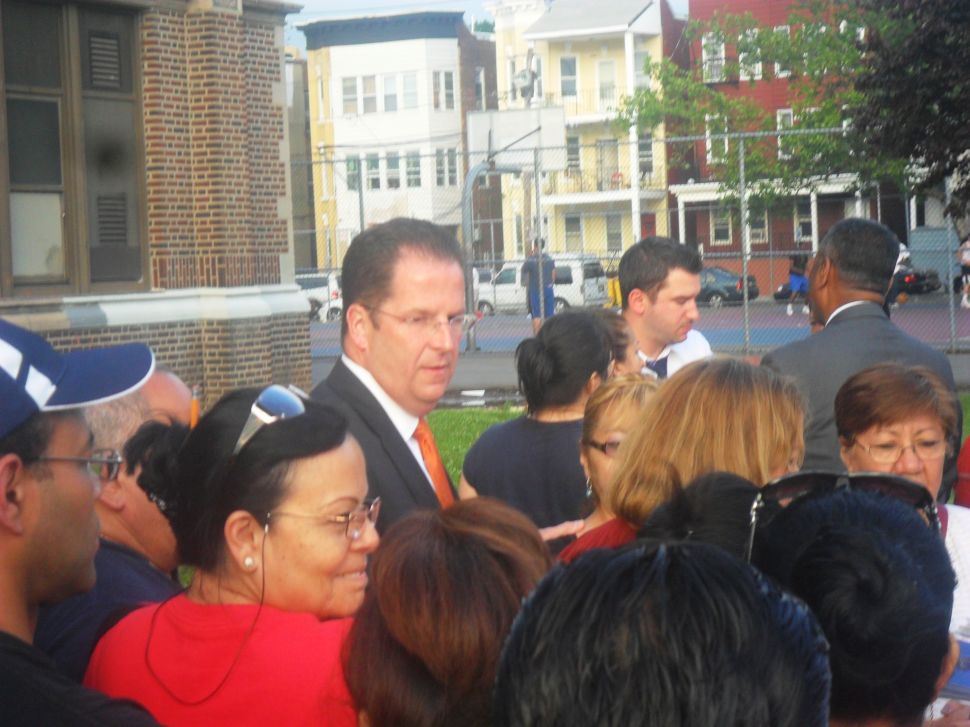