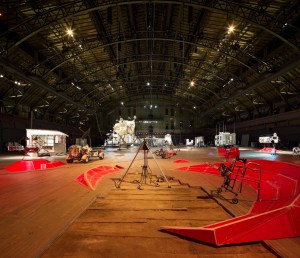 Tom Sachs’s “Mission to Mars” installation, with its ersatz space paraphernalia, is a place where anything is possible and even failure is funny and beautiful, which is good because he and his crew failed pretty spectacularly when they tried to cut a hole in the floor of the Park Avenue Armory with a chainsaw last Thursday. No one was hurt.

The two-hour event had been billed as one of the big attractions in the Creative Time-sponsored Sachs Armory reign, a follow-up to that bit where he drilled into the floor at Gagosian Beverly Hills during the Mars mission’s lunar predecessor. The program for the evening’s demonstration promised “Floor Rape.”

Blastoff went well, with Mr. Sachs directing the action from a field of mission control monitors until stars filled them to the tune of Pink Floyd’s “Breathe.” The two female astronauts engaged in some awkward flirting on the ship and made out for seven months, we were told. Then, following the program, we shuffled from one end of the drill hall to the other, where identical bleachers had been assembled before the Martian surface.

“We’re well ahead of schedule,” said an elderly woman in the audience, who in five minutes would be clonked on the head by a packet of nuts that she’d fail to catch.

After a perfunctory patrol with shotguns, the two astronauts clamored into a rover and trundled to the dig site just in front of the audience, so close that NASA engineers distributed protective goggles to the first two rows, “just in case.”

The astronauts drew a spray-paint circle with a three-foot diameter, as directed by the booming voice of Mission Control, and unhooked a NASA-branded chainsaw attached to a walker. They pulled the start cord, and you could feel the crowd’s anticipation ease as the chainsaw sunk it into the Armory floor, spraying yellow flecks of sawdust back toward the lander.

It was around the time that Mission Control made a “that’s what she said” joke (“It keeps getting stuck!”) that people started to fidget in their seats. It had been about 15 minutes, and Lt. Hansen hadn’t been able to get very deep, hindered by something just below the floorboards that occasionally sent up sparks when it came into contact with the chainsaw. Mission Control told her to take another pass and Mr. Sachs arrived on-site via skateboard to see what was up.

The astronauts drilled three shallow holes in the circle and latched in hooks attached to a tripod winch.

“Boys,” said one of the astronauts. “I think we’re ready to rape.”

The astronauts pulled the trigger on the hand-held winch operator. Nothing happened. A NASA tech rushed over with a new battery. The taut chains moved not a single inch and a Midwestern family of nine got up and left while everyone on Mars just stood around trying to figure out what to do next. Off to the side, the chainsaw smoked and dripped grey liquid.

Mission Control toyed with the idea of having the two commence “manual rape” using pickaxes and shovels, but at that point the crowd was losing mass. “Uh, actually, we’re rapidly approaching our blast-off window,” Mission Control said. “Collect loosies and return to lander, over.”

And so it was that the astronauts had to flee Mars and return home with only a handful of sawdust and one or two papier-mâché rocks, the floor of the Armory very much intact.

“It wouldn’t have been fun if everything went right,” Mr. Sachs shrugged, afterward at the champagne party in the lobby. “It would have been a movie.”