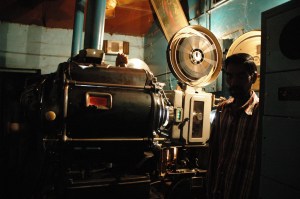 Artist Tacita Dean has taken to the pages of The Wrap website (its tagline: “Covering Hollywood”) to slam the film industry for abandoning analog prints in favor of digital.

In her editorial, Ms. Dean makes the case that, because of industry leaders’ obsession with promoting digital technologies, companies and labs dealing with analog film are on the way out, and that she soon may have great difficulty making and screening her film work. (Last year, she debuted a 40-foot-tall piece called FILM in the Tate Modern’s Turbine Hall. Emily Eakin profiled her in The New Yorker to mark the occasion.)

Here’s a bit of the artist’s article:

Ms. Dean has a handsome show of her film work at the New Museum right now. It’s called “Five Americans,” and runs through July 1, 2012.