Well, we now know what he meant by “immediate horizon.” And it wasn’t “for the next year.”

It was probably more like “in the next month or so.”

Today, Yassky told the New York Daily News that it is “reasonable” that a group of taxi cab fleet owners and drives would want an increase of “between 16% and 20%,” which is going to be discussed at a public hearing on May 31st.

Before you start keying cabs, a few things to keep in mind:

Livery Drivers: Last month, taxi cab drivers (who have to have medallions issued by the TLC) had to deal with the news that livery cabs could be legally hailed in Northern Manhattan and the other four boroughs, beginning this summer. Livery cabs could take away from Yellow Cab drivers’ business, especially when they’re trying to pick up hails in the outer boroughs, which already isn’t consistent (and which is why drivers hate taking you to Brooklyn from Manhattan). If taxi drivers have more competition and 10% less business because of it, they’re going to naturally want to charge more money.

Medallions Are Still Prohibitively Expensive and Crazy Valuable (for Drivers): At the last Taxi Medallion auction, the average bid for corporate medallion owners was $1,237,189.51. The average price of a Taxi Medallion from one owner to another in May 2004 was $323,000 for a corporate license, and in April 2012, it was $1,000,000. Most taxi drivers—because they don’t own medallions—only take home a cut of what they make, after taxes, credit card charges, and the money they pay to lease the cab from its owner. Even if the value of an NYC Taxi Medallion falls because of the influx of livery cabs, if any of them aspire to move up and own their own business (or: cab), quite simply, they’re going to have to make more money. Even if they do, it might not matter in the end (because of what Felix Salmon at Reuters sees as a Medallion Bubble). It might benefit drivers to simply make more money now at the meter, than in the future with a Medallion.

Gas Is Expensive: Here’s the price of Gas in New York over the last three years.

Someone’s gotta pay for that.

The Dollar Sucks (or: Inflation): You probably hear the word “inflation” a lot, but a quick refresher? Sure: It’s what happens when the government puts a bunch of money in the economy, and the dollar becomes worth less, so prices adjust (i.e. “go higher”). And guess what’s happened to the dollar lately? It buys less than it used to. To be fair, it almost always does. And higher gas prices (see above) are supposed to be deflationary (because more expensive gas slows down the economy and the need for more money to go into circulation). But in New York, it doesn’t work that way when cab drivers have the same amount of business as they always do—when was the last time you had no problem whatsoever hailing a cab on a rainy day—and yet, everything around them is still expensive.

Basically, at the very least, drivers want to continue making the same amount of money (though at those numbers they’re proposing, they’re looking to make more for the moment, bargaining hard, and/or know how not-often the opportunity to be taken seriously for a fare increase comes up).

Either way, (A) they’re probably going to get some kind of increase, and (B) locals’ and tourists’ best option alike still remains a Metrocard and decent walking shoes. Also, a bike (which the city is already trying to capitalize on). If you’re looking for a positive spin, here, it’s that fare increases present a decent reason for you to feel significantly less guilty about telling your cabbie to take you over a bridge, away from Manhattan. So there’s that. 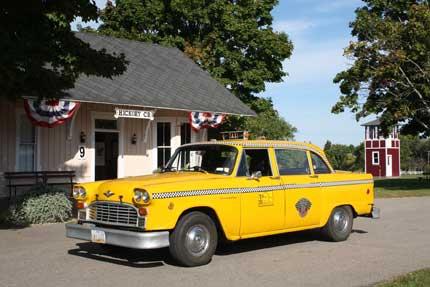