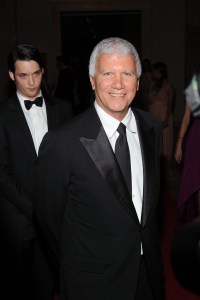 Larry Gagosian’s Upper East Side office has “the calm of a private papal chamber,” according to author Philip Delves Broughton. He visited the dealer back in 2000 for an article in the Daily Telegraph on the occasion of the opening of the first Gagosian Gallery in London, on Heddon Street. Mr. Delves Broughton has drawn on that interview for a section of his new book, The Art of the Sale, which profiles a number of high-profile deal-makers in various industries.

Mr. Delves Broughton paints a rich, dramatic picture of his visit to the gallery—”one of the most remarkable spaces in Manhattan, large white room after large white room, like a mental asylum” —and the moment he meets the dealer is pretty intense:

He looked like a recently minted Russian billionaire, an ex-KGB man suddenly given a lucrative oil concession for services rendered, wearing a houndstooth jacket, baggy beige slacks, and a turtleneck sweater. His hands were folded over his groin, like a soccer player defending against a penalty kick.

By this point Mr. Delves Broughton has quoted various people’s opinions of Mr. Gagosian, really getting us excited to meet him. One critic says the dealer is “an extraterrestrial trying to communicate with our species.” Jeff Koons said, “Larry enjoys these different types of transactions, that type of energy. It’s kind of like a sexual energy.” (If these quotes sound vaguely familiar, it’s because they’re from a 2008 profile of the dealer, by Observer Culture Editor Sarah Douglas, published in The Economist‘s Intelligent Life magazine.)

But back to the story. The dealer finally speaks, and it’s reported that his “voice was soupy and languid, like warm ocean , monotonous, low, confidential, self-effacing.”

The really thrilling part is when Mr. Delves Broughton gets to hear about Mr. Gagosian’s first experience of New York. He’d come there from California when he was in his early 20s to visit his aunt and uncle. Here’s the dealer:

I’ll never forget it, when I got out of the cab to walk to their apartment, just the look of the city, the feel of it just hit me. Immediately. I’d never seen anything like it. And it just made everything else look pale by comparison. Mind you, I’d never been to Europe at this point or really traveled that much, so I was a pretty blank slate in terms of travel experience. But it was a palpable thing. The people on the street, the way they looked, the buildings, the energy, something about it. It was beautiful, just beautiful.

That young man from the San Fernando Valley would find plenty to love in New York, and it would become the foundation of a worldwide empire on which the sun never sets. Doing this, he has attracted his share of enemies. As Mr. Delves Broughton writes:

He made himself the equal of people who thought themselves superior. And for that he may never be forgiven.

Filed Under: Arts, Larry Gagosian, Philip Delves Broughton, The Art of the Sale