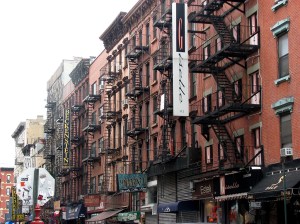 Every once in a while it’s nice to spend a Friday morning reading about New York in those pre-gentrification, pre-Giuliani days. BlackBook affords just such an opportunity today, sitting down for an interview with photographer Clayton Patterson, who’s said to have amassed around half a million photographs of New York life over the past few decades.

Mr. Patterson has some interesting things to say about club life back in the 1980s, but the most relevant section may be his recollection of the Lower East Side in the 1980s and 1990s, before the neighborhood became home to hundreds of bars and restaurants, and became a site of a gallery bubble that may soon rival that of the 1980s East Village.

I came over to Essex where I am now in 1983. At that time, one of the demarcation lines was Avenue A from Houston to Delancey. Below Avenue A was serious, and the deeper you went the more serious it got. And then this side between Houston and Delancey was like no mans land because there was really no reason to be over here, especially below Orchard Street. So this area was pure hardcore drugs. First night we moved to our place, we saw somebody get shot across the street. And then from Houston north to 14th Street, it used to be divided off. If you go back and look at maps of the East Village, it used to stop on Avenue A. Eventually the maps get redrawn and it went to Avenue B, and maybe by the end of the nineties it went to Avenue C. So that’s how much it’s changed. It basically wasn’t that populated in terms of like it is now where anybody can walk around doing anything.