The New Art Dealers Alliance opened its first ever fair in New York City on Friday in the old Dia building in Chelsea, the nonprofit’s fourth event since June of last year. In less than 12 months, it has held fairs in Hudson, N.Y., Miami Beach during Art Basel, and, at the end of April, was a part of Art Cologne as well. This is all the more impressive because NADA’s founder and director, Heather Hubbs, just had a baby about three weeks ago; instead of racing around the building screaming into a walkie-talkie, the typical fair director pose, she was maintaining order while simultaneously making sure her new child didn’t have a meltdown in front of the 60 or so exhibitors.

“It was a little bit crazy to do Cologne and New York given that they’re so close together, but we decided we could try it,” Ms. Hubbs said. “We don’t have a lot of red tape to go through.”

NADA first started in Miami in 2003 as a kind of response to Art Basel Miami Beach. Now, Ms. Hubbs said the organization goes where they are needed to help its members. With Frieze holding its first fair in New York right now, New York has an all new week of fairs, even though the last week of fairs was less than two months ago. “Until recently,” she said “the Armory had its place and nobody was questioning it. Since then, things have changed a little.”

For one thing, there are many more fairs. A lot of galleries had just participated in fairs in Europe, and were getting ready to go back for more next month. This meant there were a lot of jet-lagged dealers putting on brave faces. The Lower East Side gallery Eleven Rivington, for instance, had a booth at Armory in March, did Brussels in April, are now back in New York for NADA and will depart for Hong Kong International Art Fair in less than two weeks.

“I think the gallery is young, so for me, art fairs are the most exposure we can get,” said Augusto Arbizo, partner and director at the gallery. He was showing work by Jeronimo Elespe and Michael DeLucia and had sold most everything in the first hour. He said he likes doing so many fairs because he likes talking to people, but he added, “It stretches the limits of the inventory. I’m not going to do a fair unless I can bring ‘A’ work. You have to get that message across, that you’re not just doing this to show up.”

On that note, a lot of galleries were thoughtful with the work they brought. The dealer Rachel Uffner–who also just had a baby (there must be something in the air; she called Ms. Hubbs her “pregnancy buddy”)–had a large portrait by Anya Kielar. It was made of spiraled lines cut into velvet fabric, which made the portait’s mouth look a little like it was wide open and screaming.

“This is funnily appropriate because The Scream just sold for the most money ever,” Ms. Uffner said. Ms. Kielar’s work was a comparable steal at $12,000. It sounds ridiculous to say (what better reason to do it?), but that’s ten thousand times less than what the Munch pastel sold for at Sotheby’s this week.

Untitled, who had just shown at Dallas Art Fair and Cologne, was sharing a booth with Ibid Projects from London. They were displaying huge wood sculptures by David Adamo and had sold all but one of them (the largest, which stood about 10 feet tall). Maybe the best thing about NADA is that it feels a little more democratic than the usual art fair.

“We see a lot of friends that never visit me in my gallery because I’m too far away,” said Jose Martos. “We talk a lot of bullshit. Like you, you come to NADA, but you never come to see me at the gallery, you motherfucker.” He also had something of a joint booth. He was showing work from Martos Gallery, his Chelsea space (monochrome panels by Henry Codax), and on the outer wall had work by Joshua Smith that was exhibited on behalf of his new independent project space, Shoot the Lobster. “I also have this 1942 duvet bed where we can have a nap,” and he gestured to just that, which was sitting in the middle of the booth. “I don’t get lonely at a fair.”

The question on a lot of people’s minds right now is whether New York needs both Armory Week and Frieze Week so close to one another (more than a few people, including Ms. Hubbs, have mentioned something akin to art fair natural selection–that one of the fairs will eventually have to drive the other one out). Paul Morris, the Armory Show’s director, has been making his rounds and was on the roof at NADA.

“I went to Cologne and I went to Brussels and yesterday, along with everyone else, I went to Frieze,” he said. “I feel for the dealers. When I opened a gallery in the early 90’s, there were three fairs you thought about–Basel, Chicago and Cologne. Now you have 65 art fairs you have to think about. Every gallery has to be different, every artist has to be different, every fair has to be different.” He said he thinks NADA is “fantastic” and that he always buys something there (he was eying a work on the first day but wasn’t sure if it was available). Still, a lot of people think it poses a threat to the Armory Show and its offshoots (to this he replied, “People sell at the Armory. If people sell, I could have an art fair in Hoboken,” and he gestured to New Jersey across the river). Mr. Morris says he learns something from every fair he goes to, but with this new batch, “I actually have more questions than answers right now. I’m barely back in this time zone.” 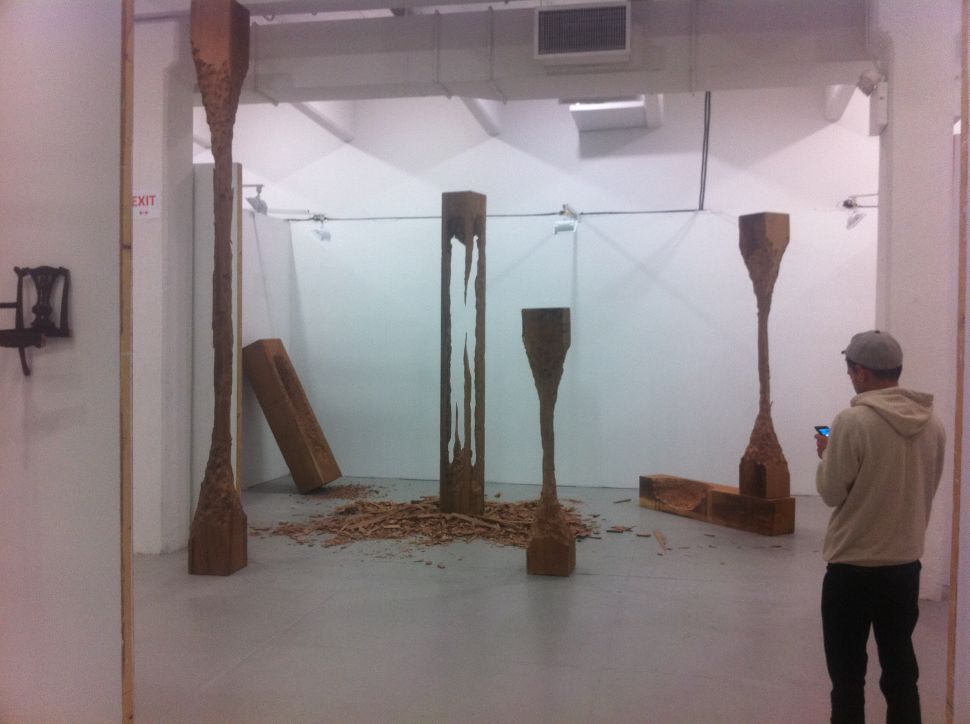