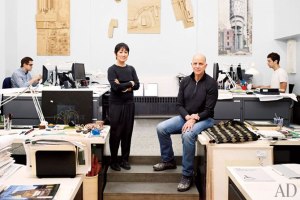 The design of the new Barnes Foundation in Philadelphia by Tod Williams and Billie Tsien, the husband and wife architecture team, is a hot topic these days. Critic Justin Davidson called it ‘virtuosic,’ while Christopher Hawthorne likened it to a “paint-by-numbers exercise.” Architectural Digest has an interview with the duo, whose 28-person Manhattan firm is unveiling four buildings in 2012, from Hong Kong to Washington, D.C. While there’s a slide show of their other projects as well, it’s the controversial Barnes site that’s on our minds.

Here’s an excerpt of the interview:

Architectural Digest: Though the envelope itself is new, you were asked to replicate the interior setting of the old Barnes building so that the paintings could be arranged in the salon style Albert Barnes conceived.

Tod Williams: As architects, we’re often asked to do very specific things. The hanging [of the paintings] is unusual to our eyes—we’re not used to seeing such a rich and dense, texturally loaded elevation. But we really came to appreciate Barnes’s eye and his thinking. Now that we look at the work being installed, it’s in the same order, but it’s stronger than it ever was. We’ve certainly adjusted things—the floor, the lighting, the moldings, the plaster texture—little things that I think bring the collection back to life.