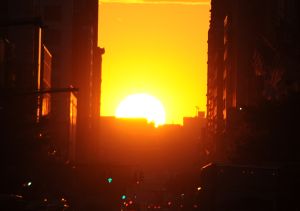 The sun sets along 34th Street, aligning with the Manhattan street grid during “Manhattanhenge” July 13, 2011 in New York. It is dubbed “Manhattanhenge” and happens two times a year when the Sun aligns at dusk with streets in a glowing magic trick as rays of sunlight span across New York perfectly, from west to east. “Manhattanhenge may just be a unique urban phenomenon in the world,” says astrophysicist Neil deGrasse Tyson, of the American Museum of Natural History, who officially discovered the phenomenon. The name “Manhattanhenge” is a play on Manhattan, this city’s most famous borough, and Stonehenge, the megalithic monument in southern England with large stone blocks set out in concentric circles. At Stonehenge, the Sun crosses the site’s central axis during the summer and winter solstices, leading experts to speculate that the site could have been used as a sort of sun calendar, as well as for religious ceremonies. AFP PHOTO/Stan HONDA (Photo credit should read STAN HONDA/AFP/Getty Images)