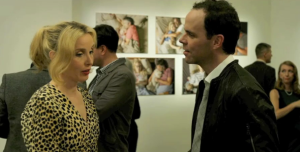 An excerpt of Julie Delpy’s latest film, Two Days in New York, released today on Nowness, opens with a scene at an art gallery. The artist Marion, played by Ms. Delpy, is showing her latest works, Cindy Sherman knock-offs hung up salon style around the gallery, and being berated by her dealer because she “can’t sell a thing.”

When an important art critic walks in, “The” John Kelly, Marion is forced to speak with him. He comments on her placement of her work “within the same realm as Cindy Sherman, Nan Goldin, Sophie Calle,” to which she swoons a little and says, “Well they’re amazing.” He responds by putting his hand over his heart, rolling his eyes and saying, “Amazing. Amazing. Brilliant.” Then he basically sums up his critique for her on the spot so she doesn’t need to wait until the next day.

While this felt a little more like a scene between a woman and a potential love interest in a rom-com rather than an outtake of the New York art world, our writerly hearts did skip a beat when Marion, noticing that the critic is taking notes, admonishes him, “You’re not writing that are you?”