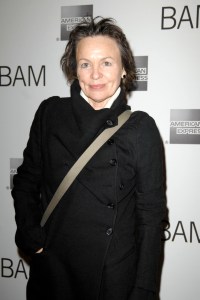 Vito Schnabel, the curator, dealer and son of Julian, has organized a show of paintings, drawings and sculpture by Laurie Anderson. Ms. Anderson, who is married to Lou Reed (a longtime neighbor to the Schnabels), is best known for her work in performance, as well as the song “O Superman,” one of the stranger selections in the pop music canon.

Last year, Ms. Anderson exhibited her drawings at the Fabric Workshop and Museum in Philadelphia in a show, which also included text, sculpture and projections, called “Forty-Nine Days in the Bardo.” Mr. Schnabel saw the show and said he was “blown away.”

“My father knows her and I was introduced to her at a young age,” Mr. Schnabel said. “As a kid growing up, I’d seen some of her performances. But before I saw her show in Philadelphia, I had never seen work like that come out of her.”

Ten drawings from the Philadelphia show will be on view, as well as drawings made on fabric, paintings and a sculpture that will project an image of Ms. Anderson and her dog Lola Belle (who passed away last year).

The show opens May 11 at a gallery space at Greenwich and Leroy, which Mr. Schnabel has been using for exhibitions lately, including a show of work by Vahakn Arslanian that is up until May 3.