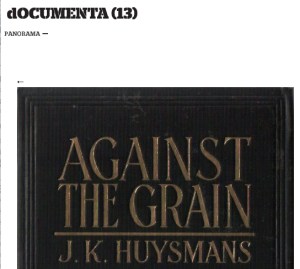 Mr. Lindemann, whom readers may know as the Observer‘s longtime art world columnist, recently started a gallery in 980 Madison named Venus Over Manhattan. His debut show is called “À Rebours,” and is named for what is probably Huysmans most famous book, which concerns the life of a decadent aesthete-collector type.

But it’s not just collector-writer-gallerists taking interest in Huysmans tale. An image of an English edition of the book, published under the name Against the Grain, just appeared on the website for this year’s Documenta, the rigorously theoretical exhibition that alights every five years in Kassel, Germany. It’s filed in the site’s “Panorama” section, where director Carolyn Christov-Bakargiev and her team regularly post items related to their research. Perhaps they have a certain Upper East Side collector on their minds?