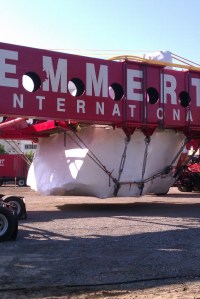 One Michael Heizer project on its way to completion. (Courtesy bunnicula/Flickr)

In the Los Angeles Times today, Jori Finkel profiles artist Michael Heizer, whose Levitated Mass, made of a 340-ton boulder propped above a concrete chasm, is about to go on view at the Los Angeles County Museum of Art.

Ms. Finkel got Mr. Heizer to talk a bit about his City, a massive series of sculptures in the Nevada desert that he has been working on since 1970 with funding from New York’s Dia Art Foundation and other sources. Very few people have seen the wildly ambitious work. Here’s the writer’s description:

“[It is] a mile-and-a-half-long art installation on private land near his ranch in Nevada, begun in 1970 and still in progress. Made largely out of earth, “City” consists of geometric depressions, mounds and plazas linked by unpaved roads.

“According to the few who have seen it, the project is a compendium of his sculptural ideas comparable in complexity to ancient ceremonial cities like Chichen Itza in the Yucatan.”

Mr. Heizer told the Times: “It will be done in the next few years. You can’t show it until it’s done.” Interestingly, much to our surprise, that timetable actually conforms with the one that he shared with Michael Kimmelman in 2005, when the pair met at the artist’s desert compound. Mr. Heizer told the then-chief art critic of The New York Times that it would be another decade before the public was invited to view the site.

So, while no one is booking their flights yet, we’re willing to venture that it sounds like this piece actually might—just might—happen. Although, Mr. Heizer also told Ms. Finkel, “Artwork is not like a commercial business; there is no such thing as a schedule for art. You can’t hurry art.” So really it’s anyone’s guess. (He also told her, “My paintings are big too. I’m not very good at making small stuff.”)

Mr. Kimmelman’s profile is well worth a read over this upcoming Memorial Day weekend, and includes Mr. Heizer’s perhaps-paranoid speculation that various groups are out to stop City: ”I wouldn’t be surprised if they sent out a hit squad to kill me!”

Now if we can just get a definite opening date on Roden Crater, all will be well in the world.