The CD 9 contender held a massive rally with his supporters in Paterson. If perception is reality in politics, the sight of a packed St. Joseph’s Hall cheering on the incumbent Democrat as he tries to gather momentum for his primary faceoff with U.S. Rep. Steve Rothman (D-9) certainly can’t hurt.

The CD 10 candidate received the endorsements of the CWA and SEIU this week, turning heads in the camp of frontrunner Newark Council President Donald Payne Jr.

The incumbent CD 7 congressman this week picked up the endorsement of conservative darling U.S. Rep. Paul Ryan as Lance attempts to blunt the attack from the right of Tewksbury challenger David Larsen in the Republican Primary.

The governor loved his own video with fellow sensation Cory Booker, and so did a lot of other people, but state revenue projections this year are still an estimated $350 million short.

The Senate President angered members of his own caucus when they learned he reached a tax cut deal with the governor without their input. Usually more deft at the politics, Sweeney canceled his press conference with the governor as he faced damage control duty.

A mailer from the Gill camp included a plea for money to make sure that Gill joins the all-male state congressional delegation next year. But the letter left donors to believe Gill was the fairer sex’s only hope at having a woman included in the delegation in 2013 – a snub of South Jersey’s Shelley Adler in CD 3.

When the legally embattled Hamilton mayor introduced himself to the 20 to 30 executives in the room by saying “I’m John Bencivengo. Fugitive,” a very uncomfortable silence and a few nervous laughs ensured at a recent meeting of the Hamilton Partnership. 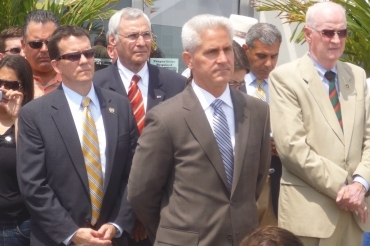