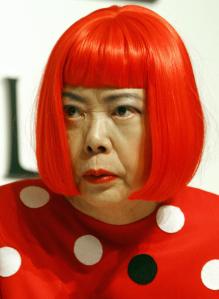 Steven Heller, co-chair of the MFA Design program at the School of Visual Arts, has a few amusing anecdotes about his early interactions with the artist Yayoi Kusama over at The Atlantic today.

The following sampler is set when Mr. Heller is 17 and the art director for Screw magazine, that great Atlantic feeder.

“I come now, bring photos,” Kusama announced in such fast-clipped, heavily accented English that I almost believed that she was speaking—and I was understanding—Japanese. She’d arrive at the door moments later, as though she had called from just around the corner. Usually, she’d stay for an hour or so, explaining the hidden meaning of every single shot. Listening was torture.

I’d never met anyone as self-promotional as Kusama. But I’m reminded of Woody Allen’s joke about the guy who had a brother who thought he was a chicken: When asked why he wasn’t committed to a mental asylum, the reply was “’cause we need the eggs!” Well, at Screw we needed the photos—and Kusama kept the underground sex press well-stocked.

The headline of the piece, “Yayoi Kusama: The Polka-Dot-Loving Art Legend I Initially Mistook for Crazy” is slightly inaccurate in that Ms. Kusama was, it seems, crazy. It’s just that she was crazy in a useful way.