Since the launch of Between Two Ferns on FunnyOrDie.com in 2008, people have been clamoring for Zach Galifianakis and Scott Aukermanto turn their short-form experimental interview project into a 30-minute television show. (We certainly wouldn’t have minded if Mr. Galifiankis’ awkward, confrontational interrogations of celebrities replaced the majority of television interviews.)

You can watch the full episode on Comedy Central, but here’s the bit that everyone’s talking about today, featuring 30 Rock‘s Tina Fey:

Some critics are complaining that taking the web show and elongating it for television ruined the jokes. (You know what they say about comedy: It’s all about…), though most were content to just to heap on the lavish praise while watch Mr. Galifianakis talk to a variety of famous faces, including Jon Stewart and Sir Richard Branson. What did you think? 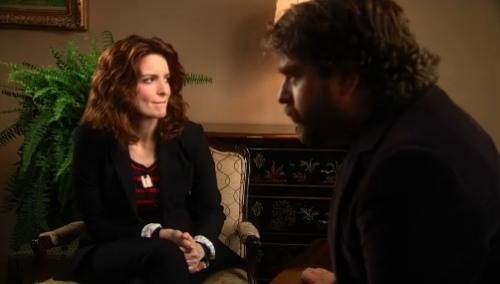