Last week, The Journal got its hands on a 67-page marketing packet for Harry Macklowe and CIM’s soaring tower at 432 Park Avenue, the former Drake Hotel site where the developers are working on the tallest tower in the entire city, apartment or otherwise.

In their write-up, Journal journalist Eliot Brown and Craig Karmin mentioned that inside the packet “are a collection of striking images of what would be the tallest residential tower in the U.S. at 1,395 feet as well as a number of other interesting factoids about the tower, called 432 Park.”

Those factoids are below, but what obviously whet The Observer‘s appetite most was the promise of “striking images” (we have a thing for those) that were sadly absent from The Journal‘s report. But no more.

The Observer put out a call for some of the renderings and got lucky with two. Our understanding is there are more, basically all showing the building through the day from diffferent angles. What may be as striking as the height and the views is how singular it looks from all sides–quite the contrary from its rival One57, which with its waterfall-like facade looks different from all sides. It almost reminds us of the Trump obelisk near the U.N.

Now, for those factoids, courtesy The Journal:

The tower, designed by Rafael Viñoly and developed by Harry Macklowe, is expected to cost $1.2 billion; when everything is completed, CIM projects it would net $2.5 billion from sales of residential units and and other space, which is mostly retail.

The expected average sales price is $4,500 per square foot, which would be below recent resales at the Time Warner Center and asking prices at One57.

CIM expects to pre-sell 40 of them, and then sell four per month; closings are expected to begin in October 2014, and the building is planned to hit “substantial completion” in April 2015.

There would be 25 studios “to house residential support staff.”

The retail would run along 57th Street with 101 feet of frontage. 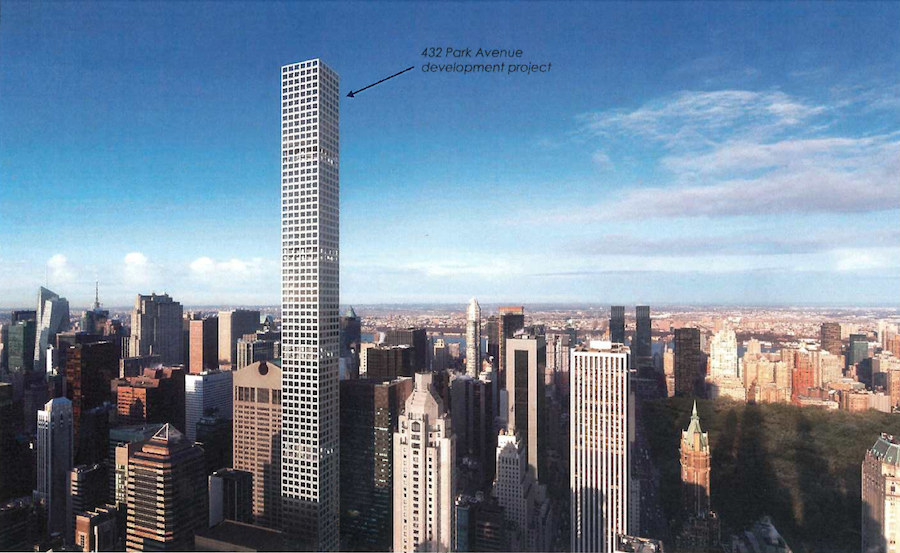