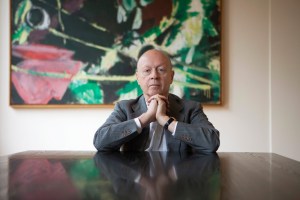 Hans Neuendorf, who has served as CEO of Artnet AG since 1995, resigned his position today. He will be replaced by his son Jacob Pabst.

Mr. Pabst, who takes his mother’s name, has served as president of the company for the past year and was confirmed as Mr. Neuendorf’s successor by the company’s supervisory board today. Artnet is a German-based tech company best known for its auction price database, which is widely used by dealers to establish a “Blue Book” value for a piece of art by determining what others have paid for work by artists in the past. In recent years the company has expanded into the areas of auction analysis and low-end online auctions.

“Nobody wants to let go of something that he’s doing, so it took a little bit of effort on my part to come to terms with it,” said the 74-year-old Mr. Neuendorf on a phone call today with The Observer. “It took some time to actually decide to do it.”

“It’s a good thing, though!” He added. “The new generation is taking over. Jacob has his own team and everything is working perfectly. I’m very happy because I have a son to take over. Not everyone is that lucky.”

Mr. Neuendorf was recently the subject of a lengthy profile in Der Spiegel.