Before I became a mother, I was, as my Sonoma County aunt is fond of saying, “a lover of the grape.” I liked my wine. So much so, in fact, that when I got pregnant, I continued to hold stemware at parties, feigning sips, because I knew that if I were to abstain among anyone who had seen the old, half-a-bottle-a-night me in action, the jig would immediately be up.

My pregnancy, of course, was largely dry. (Both my general practitioner and my midwife assured me that the occasional drink—even a few ounces of wine every day!—would be fine, but I found that my cravings for egg salad sandwiches and watermelon eclipsed my nostalgia for riojas and tempranillos.) It wasn’t until high summer, when I was seven months along and needing to relax after a long day at work, that I decided to break my alcohol fast, and even then I watered the two fingers of sauvignon blanc down with so much seltzer that I probably would have gotten more of a buzz using mouthwash.

I harbored abstinence-induced fantasies of glugging a fishbowl-sized glass as soon as I went into labor, but since that ended up happening at 6 a.m., the first contractions promptly followed by retching over the side of the bed into a Citarella bag, I did not, in the end, feel like bellying up to the bar, and even for the first few weeks postpartum, the suggestion to crack a bottle of celebratory champagne sounded about as appealing as doing a Jäger bomb.

That all changed by the time my son was about two months old. Once I had adjusted to the constant sleep deprivation (which, like drunkenness, tends to negatively impact your decision-making skills—as I discovered in the wee hours one morning as I hovered over the toilet, holding my wailing infant to my chest and trying to keep his swaddle out of the stream) and completed the Mensa application that is the unassisted donning of a Moby Wrap, I felt ready to resume semi-regular drinking.

This has been much easier said than done. My husband works late, and as a freelance writer I can’t afford much paid babysitting. So boozing, for me, necessitates doing it with baby in tow.

I started with an adventurous outing, meeting a friend, who in my former life had been a favorite drinking buddy, at Noho’s Five Points for happy hour. I ordered a $5 glass of wine and single-handedly demolished a bowl of complimentary potato chips with the vacuum power (and approximate grace) of a Flowbee. Nothing abnormal there. But as the dinner rush started and people filled the bar, I received some questionable looks. Because on my lap, buried under the potato detritus, sat my son. He was relatively quiet, especially given the din, but seemed out of place attempting to gnaw on the craft beer taps. My friend was proud of me for balancing motherhood and malbec, and even bragged on Facebook that she’d lured Sam out to his first bar. But I was self-conscious, and for once not willing to raise my blood alcohol level enough to numb it away.

A few weeks later, I learned that a German beer hall in my neighborhood hosted weekly “play dates” in the mid-afternoon, before patrons employed by larger and presumably more continent bosses got out of work. I showed up at 2:30 on a Thursday to find colorful mats covering the floors, and fellow nursing moms nursing hefeweissbiers cross-legged as their infants flailed beneath them.

The atmosphere seemed friendly enough, until a sour-faced twentysomething bartender approached and had me sign a sobering waiver promising never to let my child touch anything outside the boundary of the play space and swear upon pain of expulsion to use the changing table for diaper duty—which was inexplicably in the men’s room. I get that it’s health code stuff, but the contract still seemed awfully formal. That, coupled with the fact that there were no drink specials, left me cold. So I turned to my last resort: Playgroup.

Every week I meet with a small klatch of other new moms and their babies at one of their Park Slope homes. Emails are exchanged the day before to plan the potluck menu.

“I’m picking up some hummus and carrot sticks!” one will write.

“I’m trying some no-bake energy balls I saw on Pinterest!” another will chime in.

One week, the host was going through a personal crisis. I jumped at the opportunity.

“If only you were a drinker, I would bring a bottle of wine for ‘snack,’” I typed, adding a winking emoticon to communicate that I was totally kidding, ha ha, unless… she was into it. 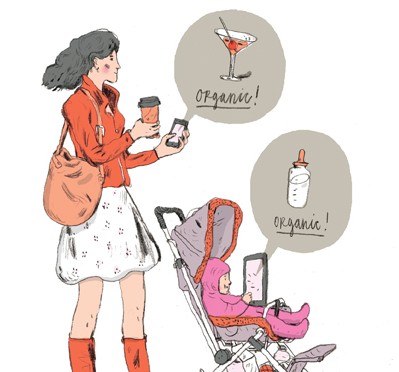