But on Monday night, Mr. Ellis went in a totally different direction, pushing his Kickstarter-backed film The Canyons with some scintillating casting. But that’s not all! Mr. Ellis has been binging on another Twitter-saga this week, igniting a firestorm of rumors that he would be directing the 50 Shades of Grey film and hinting at his dream casting for that adaptation.
On Monday he wrote: “Completely committed to adapting Fifty Shades of Grey. This is not a joke. Christian Grey and Ana: potentially great cinematic characters.”
This was followed by: “Okay, today the team has been briefed and we will be approaching the studio this week about BEE adapting ‘Fifty Shades of Grey’ into a film.”
Then a long debate over Ian Somerhalder in the role of Christian Grey… We have to say, between his love for Alex Pettyfer and Kristin Stewart, we’re wondering if a 15-year-old girl has taken over Mr. Ellis’ Twitter feed. Then again, his preferred choice for Ana–according to Vanity Fair–was Lena Dunham, which raises just a whole new set of possibilities.

Of course, no one is handing over an adaptation of 50 Shades to Mr. Ellis quite yet, so this is purely speculative hype. 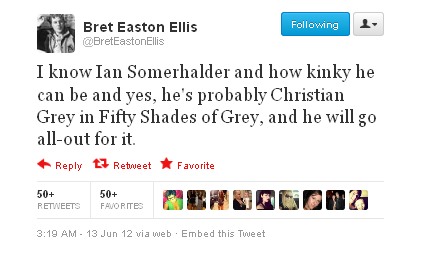