Charlie Rangel preparing to cast a ballot for himself in Harlem. (Photo: Hunter Walker)

Charlie Rangel went to vote at P.S. 175 in Harlem this morning and, in a brief press conference afterward, the longtime congressman was dismissive of his opponents, the media and the entire possibility he might lose. Today’s race is seen as potentially the toughest of the congressman’s over forty years in office thanks to the changing demographics of his district. However, Mr. Rangel first replied with a joke when a reporter asked what he’d do if he loses.

“Well, if I lose tonight, I will sleep just like a baby and cry myself to sleep,” he said with a smile.

After a few laughs, the Congressman followed up to say he doesn’t think about losing at all.

“No, no,” said Mr. Rangel. “If you have the spirit that’s necessary to overcome these political obstacles and if you’re fortunate enough to know that they’re not obstacles that you can’t overcome, than the whole attitude, ‘What do I do if I lose?’ never reaches that mental level. It really doesn’t. I would find some way to tell you if I thought it did.”

Prior to taking questions from the large crowd of assembled reporters, Congressman Rangel spoke for several minutes in an attempt to, in his words, “get rid of some of the nonsense questions” that have surrounded this race right off the bat.

“Let me try to get rid of some of the nonsense questions and that is, am I too old to run for reelection. Clearly, I’ve gone through the process, I’ve done what candidates are supposed to do,” he said.

Several of Mr. Rangel’s opponents have suggested his Upper Manhattan district is in need of new leadership after his over forty year tenure. The congressman has also been dogged by persistent reports of health problems. Between February and April he was hospitalized multiple times with what he described as spinal virus. Mr. Rangel attempted to shoot down any health concerns. He also implied his main rival, Adriano Espaillat, waited until he was in the hospital before deciding to run.

“I don’t think anybody that’s runnning or not running is going to challenge my health, albeit one candidate made certain that I had a health problem before he announced,” Mr. Rangel said, adding, “Certainly, if health was a factor, he made one big political mistake.”

Mr. Rangel said he was motivated to run to extend his lengthy tenure in the House of Representatives by the current climate in Washington. Though President Barack Obama has refrained from endorsing Mr. Rangel and even once implied he thought the congressman should retire, Mr. Rangel said his admiration for the president was one of his reasons for wanting to win re-election.

“The one reason why I think it’s important that I be allowed to extend the service to my country, and the Congress and my district is because of the times that we find ourselves in the Congress. Never before have we faced such a fiscal crisis,” said Mr. Rangel. “On the other side of this coin, I have never been so inspired by any politician and certainly no president as I have about President Obama.”

In addition to Mr. Espaillat, former Democratic National Committee political director Clyde Williams, businesswoman Joyce Johnson and Craig Schley, an ex-model, are on the ballot against Mr. Rangel. The congressman said none of his opponents have shown they’d be a better choice for voters.

“I’ve been so fortunate in this campaign that none of them, not one of them, has ever indicated they can do the job better,” Mr. Rangel said.

Both the New York Times and the Daily News gave their endorsements to Mr. Williams. Mr. Rangel criticized their decision, citing the large margin of victory he enjoyed in his last re-election campaign and his support from other elected officials.

“I know that some newspapers are committed to making decisions that are not always based on the facts, but that’s their choice,” Mr. Rangel said.

After nearly fifteen minutes of talking, Mr. Rangel’s aides began to pry him away from the crowd of supporters and supporters that assembled outside the school to watch him vote. As he was walking back to his car, The Politicker asked about his accusation that Mr. Espaillat is hedging his bets in their congressional race by simultaneously circulating petitions in order to run re-election to the State Senate if he loses.

Congressman Rangel brandished an alleged copy of a petition he said Mr. Espaillat was circulating during their NY1 debate earlier this month. Yesterday, in a conversation with The Politicker, Mr. Espaillat vigorously denied he’s still pursuing his senate seat and claimed the petition showed by Mr. Rangel looked “fake.” However, the congressman repeated the charge on Good Day New York this morning saying Mr. Espaillat is “filing that he wants to run again for the State Senate” and “should at least be mature enough” to only go after one job.

In his press conference, Mr. Rangel reversed his stance and said he takes Mr. Espaillat’s word that he’s not running for multiple offices.

“I believe Esplinard when he says he’s not running for anything except the Congress. I believe him,” Mr. Rangel said, mispronouncing his opponents name. “I want this reporter and anyone else listening to know that when Senator Esplinard says on television with me that the only office that he’s running for or interested in is the House of Representatives and that he has no interest in the seat that he vacated, which is the [State] Senate, that I am one person that believes him.” 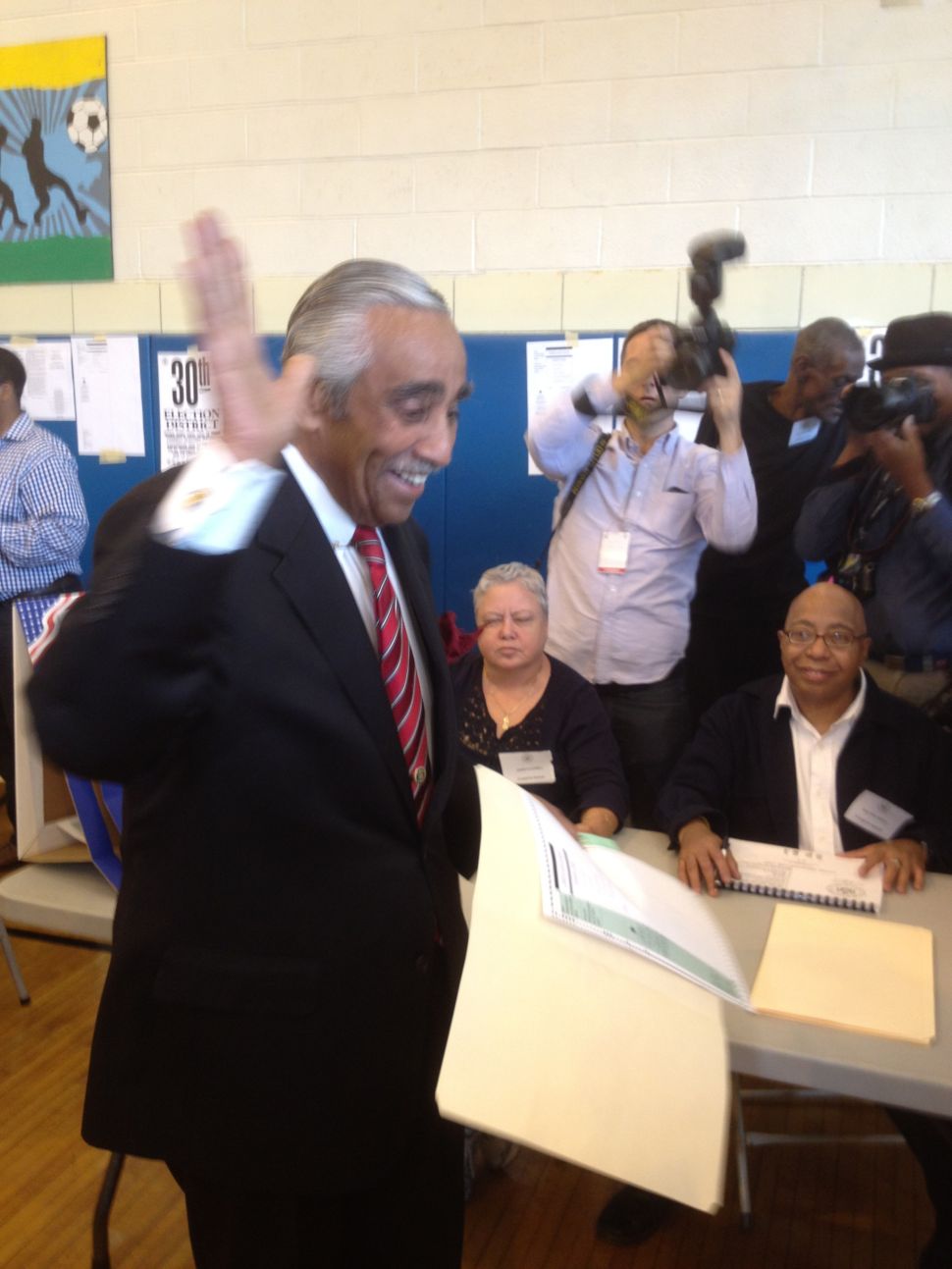