Columbia University’s School of International and Public Affairs is holding their “First-Ever” (!) salon, entitled “Inequality: The 1% vs. The 99%.” It is an opportunity for “networking and discussion” in a “casual setting.” Like a room with a punch bowl? Try a West Village bar with pricey cocktails!

Dear Columbia University: Thanks for charging me $100,000 for my graduate degree in international affairs. In exchange, let me give you a little bit of SUTTON ADVICE. I’m glad you’ve been checking out Anfora (cool place), but generally speaking, it’s probably not a great idea to host a “salon” on INEQUALITY at a swank lounge that sells $14 cocktails. Maybe let’s reconsider this one?

Indeed, “(cool)” West Village bar Anfora’s cocktails range from $12 to $14 (though their Sazerac—$13—opts for Pernod, the cheap bastards). While $20-ish would actually buy one a panini and a side-salad there, it may be an ill-advised setting for a sobering discussion (and networking opportunity) surrounding the matter of income inequality. May we suggest Chock Full o’Nuts, instead? 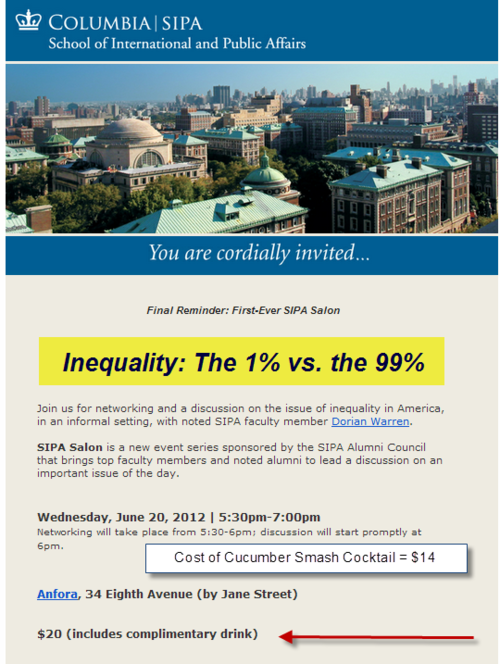