Jorge Robles is running against Democratic California Congresswoman Linda Sanchez in today’s primary and he thinks she should be removed from office. He let his supporters know why with a video entitled “Take Linda Sanchez OUT!” where he repeatedly refers to Ms. Sanchez as a “HOT MESS!!” and uses a machine gun to help make his point.

Mr. Robles’ video begins with a standard title screen and a pair of photos of Mr. Robles. After momentarily flashing on a jerky shot of a local restaurant, Tacos Don Chente, a computer animated Uzi-like gun appears on the screen and begins shooting. The bullets blast away at a concrete wall to reveal the text “Jorge Robles For Congress–TAKE LINDA SANCHEZ OUT OF OFFICE.” This machine gun computer animation repeats three times in the five-and-a-half minute video.

The Politicker spoke with Mr. Robles’ campaign manager, Robert Davis and asked why Mr. Robles chose to use the gun imagery in his ad. Mr. Davis said the ad was “just a way to get our message out” and pointed to Mr. Robles’ career as a state parole agent.

“There’s nothing into that. Mr. Robles is in law enforcement, if you’re not aware of that, so I think it’s his way of just kind of sending our message. We’re going after Linda Sanchez, not in the way that portrays it to be if you’re thinking like that,” Mr. Davis said. “We’re very strongly against her policies, and her programs and people really need to understand what she’s about.”

After the first footage of the machine gun, Mr. Robles appears standing in front of Tacos Don Chente. As ominous music plays in the background, he explains why he feels Ms. Sanchez must be removed from office.

As the dramatic soundtrack continues to play, footage of Ms. Sanchez appearing on MSNBC during last years budget crisis begins to play. The MSNBC host is shown asking Ms. Sanchez if she’d join other lawmakers and forgo her paycheck in the event of a government shutdown.

“I have to tell you that I live paycheck to paycheck like most Americans,” Ms. Sanchez replies. Following the MSNBC footage, the machine gun animation plays for the second time before more footage of Mr. Robles standing in front of the restaurant criticizing his opponent.

“She doesn’t understand that, to create jobs, is to reduce the regulations and startup fees and, as your congressional representative, that’s what I plan to do,” says Mr. Robles.

The ad continues with photos of Mr. Robles and footage of him meeting with local business people. For the grand finale, the machine gun animation plays one final time.

On his campaign website, Mr. Robles describes himself as having a “career in law enforcement.” He is a first-time candidate running as a Republican. In California’s 38th District, which is located in the Los Angeles metro area, Republicans and Democrats primary against each other with the top two vote-getters moving on to the general election. Another first-time Republican candidate, Benjamin Campos is also running against Ms. Sanchez. The district leans heavily Democratic, so Ms. Sanchez, who began serving in the House of Representatives is highly likely to win re-election, but she will probably have to face off against Mr. Robles or Mr. Campos in the general election.

In the past, political candidates have drawn criticism for using gun imagery or other implied threats in campaign materials. Last year, Sarah Palin’s PAC sparked a high profile controversy after using gun sights to indicate the Democrats in Congress they were targeting for removal. In 2010, Arizona congressional candidate Jesse Kelly hosted an event where he invited supporters to “shoot a fully automatic M16″ to “get on target” and “remove” his opponent, Gabrielle Giffords. Mr. Kelly’s event was thrust into the spotlight last year after Ms. Giffords was the victim of an assassination attempt by a deranged gunman.

As of this writing, Ms. Sanchez hasn’t responded to a request for comment on this story. 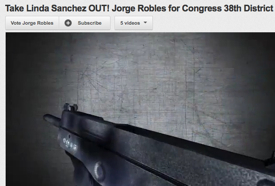