Quentin Tarantino loves a good revenge fantasy. Besides Kill Bill, his last Academy Award-winning film, Inglorious Basterds, reimagined the death of Hitler and the Nazi regime at the hands of the Jews.

Five years later, we have Django Unchained: the highly-anticipated ode to the spaghetti western in which Southern slave Jamie Foxx and German bounty hunter  Christoph Waltz are on a mission to make Southern plantation owners suffer.

The tagline of this film is “Life, liberty, and the pursuit of vengeance,” which pretty much tells you where the auteur’s head is at. Much like Inglorious Basterds, your reaction to this film will probably have less to do with its style (which is awesome) or its performances (lets just give the Oscar to Leonardo DiCaprio for Best Supporting Actor and forget about holding the Academy Awards this year), and more with how you feel about the director’s take on bloody revisionist history.

Just for an example: how do we feel about the protagonist’s salvation coming from a  German bounty hunter/dentist? Anyone else having flashbacks to Marathon Man? (Though Mr. Tarantino is far too keen on film references for that to be an accident; we’re sure the phrase “Is it safe???” will be uttered at a crucial juncture in the film.)

A coworker pointed out another issue for viewers: while the film is ostensibly a Western, it also has elements of a Blaxsploitation movie. This is not new territory for Tarantino, but might rankle those who feel that the director consistently appropriates black  culture in an effort to ramp up his quotability quotient. 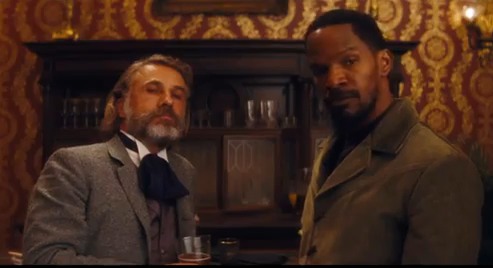