Former KKK Grand Wizard and member of the Louisiana Legislature David Duke released a video yesterday endorsing Charles Barron in his race for Brooklyn’s 8th Congressional district against Assemblyman Hakeem Jeffries. Mr. Barron, a member of the City Council and former member of the Black Panther Party who, over the years, has made a series of controversial statements against Israel and in support of African dictators including Muammar Qaddafi. He would seem to be an odd choice for a self-described “white nationalist” like Mr. Duke, but in the video, Mr. Duke explains that he thinks Mr. Jeffries has “sold his soul to the international Zio-bankers” while Mr. Barron’s strong past criticisms of Israel outweigh their other differences.

“In a race for Congress between an anti-Zionist black activist and a black activist who is a bought and paid for Zionist Uncle Tom, I’ll take the anti-Zionist any day,” Mr. Duke says in the video. “In this election of limited choices, I believe that Charles Barron is the best choice. Why? Because I think there’s no greater danger facing the United States of America and facing the world than the unbridled power of Zionist globalism. … Charles Barron stands against that power. If I lived in New York City, I would certainly vote for Charles Barron.”

Mr. Duke begins his video by noting that Mr. Barron has been labeled the “David Duke of New York City” by his political opponents.

“The possible election of a dedicated anti-Zionist to the U.S. Congress has thrown the Zionist influenced media and the Zio-political establishment in a tizzy,” Mr. Duke says. “The Jewish-controlled New York media is now calling Barron the, quote, ‘David Duke of New York,’ unquote. I’ve been deluged by media inquiries as to whether I would endorse Barron because of his very strong anti-Zionist and anti-Israel positions.”

The nearly nine minute video continues with Mr. Duke outlining his “agreements and disagreements with Charles Barron.” He begins by discussing Israel.

“I certainly agree with Barron that Israel is the worst rogue terrorist state on Earth. It’s not Iran folks,” Mr. Duke says. “Barron is certainly right about Zionist control over the media and our government, and the treason that’s existed in our Congress and he’s right about the fact that Zionist wars have caused the death or harming of hundreds of thousands of Americans and cost you trillions of your tax dollars. Barron’s opponent, on the other hand, is a complete Zionist sellout of both the black people and all the people of America.”

Mr. Duke goes on to say he disagrees with Mr. Barron’s support for affirmative action.

He also says he disagrees with “with Barron’s extreme racist, even violently anti-white rhetoric.”

“He even once stated in 2002, quote, ‘I want to go up to the closest white person and say, ‘You can’t understand this, it’s a black thing.’ And then, slap him just for my mental health, unquote,” Mr. Duke says of Mr. Barron. “Barron’s statement shows why the media comparison between Barron and me is quite ridiculous.”

However, Mr. Duke also claims “the mainstream media and our Hollywood-controlled establishment is even more violently anti-white than anything Barron has said.” As an example of this, he cites Quentin Tarantino’s upcoming film Django Unchained, which is about a freed slave who becomes a bounty hunter. Mr. Duke concludes Mr. Barron’s past anti-white statements are the product of a divide between blacks and white that was created by the “Zio masters.”

“Black leaders like Barron should work to lessen the enmity between blacks and whites and realize that the Jewish extremists in America keep whites and blacks from mutually solving our interests and differences,” Mr. Duke says. “The Zio masters want constant conflict between the two groups so they can utilize a divide and conquer strategy over us all.”

Mr. Duke wraps up his endorsement of Mr. Barron by criticizing Mr. Jeffries, who he says, along with Barack Obama and Mitt Romney, are working for the interests of “the Zionist Club FED and the international banking establishment.”

Mr. Duke’s reasons for supporting Mr. Barron in favor of Mr. Jeffries are clear. However, Mr. Barron has recently tried to distance himself from some of his more controversial past statements as he tries to reach the House of Representatives and Mr. Duke’s endorsement could easily be a liability in a district that has substantial Jewish and black populations. 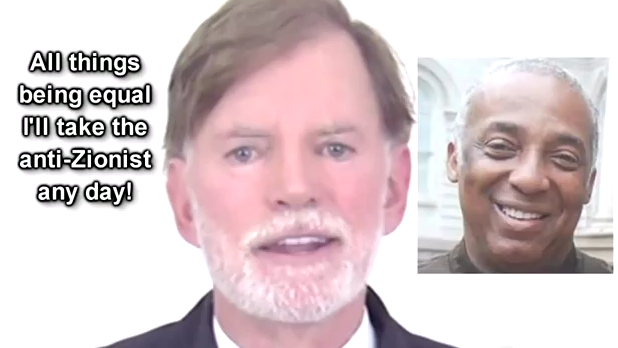