These questions regard last night’s episode of HBO’s GIRLS. Please answer the prompts with specific examples from LAST NIGHT’S EPISODE, though supplementary material will be accepted as a secondary source. Please write legibly. #2 pencils only. You have an hour to finish this test. See below for questions and example responses.

I know, right?? I totally didn’t see Marnie making out with Bobby Moynihan’s “awkward rabbi” character. As well as those other b-a-n-a-n-a-s plot developments. Actually, all of the finale. What was up with that?? Look, I made a GIF of the reaction shots for you! (Spoilers ahead…obviously.)

2. Compare and contrast the wedding of Jessa and TJ with the famous pairing of Hedda Gabler and Jørgen Tesman. How are they alike, or different?

Whoa, very good question! A++ question, and I mean that. I guess the biggest difference is that in Henrik Ibsen’s late 19th century play, it is revealed over the course of several acts that Hedda only married Jørgen because she was bored by her own life. In GIRLS, it’s immediately clear that Jessa’s only doing this because of the advice Katharine gave her on last week’s episode that ‘adult’ Jessa will be happier, if not cooler. (This is why you never listen to wisdom from grownups!)

The whole marriage stunt felt totally random and forced as a plot device, and I question the show’s decision in bringing back a character who we’ve only seen as an abusive, pathetic prick as a serious love interest. Even if Jessa’s looking for something new and exciting to speed her along the road toward to the actualization of adulthood, nothing in her character suggests that she’d delude herself into falling for JT, of all people. How will she ever cope with his “mash-ins”?

We’re supposed to view this as Jessa’s poor judgement, but it’s the show’s acumen I’m worried about. I know GIRLS loves taking its one-off cameos and bringing those characters back to demonstrate that people are multifaceted, layered little snowflakes; each filled with unique quirks that weren’t automatically apparent, like a subtle parfait of personhood. And that works when we’re dealing with Hannah’s parents, or Elijah. But as much as I loved Chris O’Dowd in Bridesmaids, JT was a one-dimensional loser whose vitriolic diatribe about bourgeois hipsters doesn’t jibe with a sudden desire to spend the rest of his life with a girl he last referred to as “Mary Poppins.” 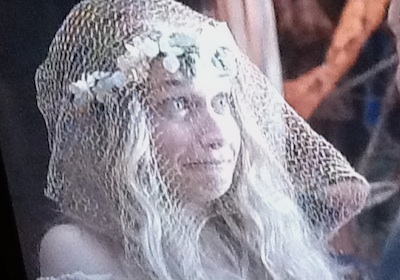