These questions regard last night’s episode of HBO’s Girls. Please answer the prompts with specific examples from LAST NIGHT’S EPISODE, though supplementary material will be accepted as a secondary source. Please write legibly. #2 pencils only. You have an hour to finish this test. See below for questions and example responses.

Oh that’s who that guy was? I thought he looked Indian. Either way, I think this episode proves exactly how crime syndicates are like literary circles: you’re not made until someone dies.

2. Following Jessa’s awkwardness with Jeff, his wife Catherine begs her to return to her nanny job, admitting, “I need you and my girls need you.” How does Jessa exemplify the ways in which nannies, governesses and other maternal surrogates have often been perceived as threatening to the family unit? (Please include a reference to Mr. Belvedere in your answer.)

Much like Tony Danza on Who’s the Boss, or Mr. Belvedere, or Mary Poppins, maternal surrogates are often frightening because they are only necessary when a mother is absent…or too absent to take care of her children. Much more revealing is Catherine’s dream, where she devours Jessa and then poops her out. So is Jessa a lesbian now?

3. At the coffee shop, Ray berates Hannah about her writing, suggesting that intimacy is a trivial subject compared to death and various societal woes. A similar accusation has often been lodged at GIRLS itself. Is Lena Dunham embracing this critique, or subtly answering her antagonists by collectively lampooning them as a douchebag barrista?

Well, it’s an interesting critique coming from Ray, who has mentioned that both his parents are dead, and who never receives any financial help himself. So he’s actually coming from a place where he’s allowed to lob that criticism at Hannah and her world. Or at least he’s better situated to make those complaints, whether they are right or wrong. Ironically, the actor who plays Ray, Alex Karpovsky, makes a lot of feature-length documentaries about non-trivial subject matter (like birds, and improv comedy,) and has expressed that GIRLS is the only acting he plans on doing. So like, there’s that. I’m not sure if that undermines or underscores Ray’s feelings about Hannah’s writing, but it’s something to think about.

4. Examine Marnie and Hannah’s dispute about who is more of “a wound” in light of the crucifiction of Jesus Christ. Who is the bigger martyr? How does Lena Dunham herself resemble the Son of God? How do they differ?

Oh god, those two going at it. The whole season was kind of building up to this, and yet I found it so unwatchable. Maybe it’s just because I hate how girls fights? Like girls never fight about whatever ostensible subject is at hand…they fight about everything, and the longer they fight, the deeper they have to mine each other’s personal histories for ammo. So by the end you don’t even know what they are yelling about, but for some reason it has to deal with Hannah’s inability to have any friends from pre-school?

Who still has friends from pre-school???

Anyway, those two both need to get down off their crosses because we need the wood…to build this totally awesome chuppah in the backyard and perform non denominational dog ceremonies.

5. The episode begins at a book party for Lena’s former writing classmate, Tally Schifferin, whose new book explores the death of a boyfriend. Imagine you are Tally. In her voice, write a chapter of her book.

James Dean. Jimi Hendrix. Amy Winehouse. I used to idolize all those rock stars who died young and left only their legacies behind, until my boyfriend committed suicide by crashing his vintage car while on Percocet. That’s when I realized that it wasn’t just legacies that got left behind when a legend died…sometimes, it was girlfriends too. 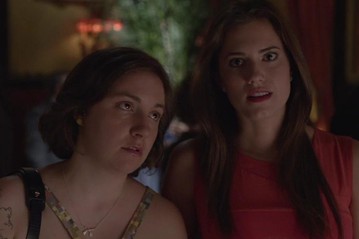